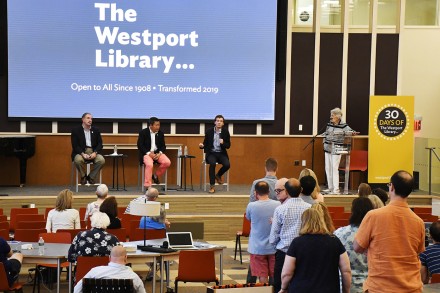 Gov. Ned Lamont and his budget director today defended their decision to build $180 million in extra income tax receipts into the new state budget, with Lamont offering assurances the money will flow as planned into the state’s coffers.

The governor, who pledged to sign the $43.4 billion, two-year state budget into law later this week, insisted the package passed by his fellow Democrats in the legislature is balanced without gimmicks.

And his budget director, Office of Policy and Management Secretary Melissa McCaw, said additional income tax receipts built into the budget are modest compared with the revenue growth her office anticipates from this source.

“I promised the people of Connecticut they were going to get a good, honest budget done on time,” Lamont told Capitol reporters following a bill signing ceremony. “And that’s just what we did and I’m going to sign the budget this week.”

In a measured speech on the House floor today, U.S. Rep. Jim Himes, D-4th District, broke ranks with House Speaker Nancy Pelosi, becoming the first member of the Connecticut delegation to join more than 70 congressional Democrats calling for an impeachment inquiry into the acts of President Donald Trump. 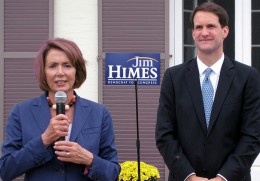 Flashback to Sept. 13, 2008 — WestportNow reported: “Speaker of the House Nancy Pelosi was in Westport today at a fundraiser for Democratic congressional candidate Jim Himes at a private residence on Beachside Avenue. Pelosi predicted Himes will defeat incumbent Republican Christopher Shays and go on to become one of the leaders of the freshman class in Congress.” (CLICK TO ENLARGE) WestportNow.com photo

“My motive today is not to pressure the speaker of the House, whose leadership in this Congress has been superb,” said Himes in a speech prepared for delivery.

“She leads us today in the epic mission of defending our democracy. That mission requires a vigorous debate and competing ideas, but it also requires care, discipline and a measure of deference. 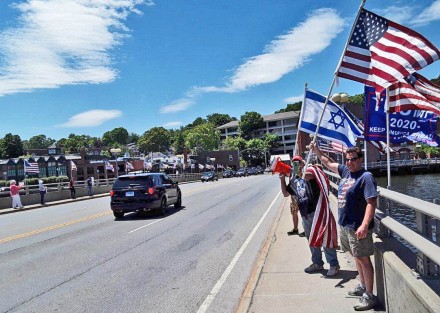 Protesters calling for the impeachment of President Trump demonstrated today on the Ruth Steinkraus Cohen Bridge in Westport’s center, part of a nationwide day of impeach Trump rallies. But they were not alone. On the other side of the bridge at least three pro-Trump supporters held a counter-protest demonstration using a bullhorn and carrying American and Israeli flags. (CLICK TO ENLARGE) Jarret Liotta for WestportNow.com

The partisan battle over the new state budget heated up today.

Minority Republicans continued to argue the $43.4 billion, two-year budget is unbalanced and unconstitutional, relying on nearly $460 million in labor savings that unions still haven’t endorsed. The budget also makes no alternative provision to balance the books if a saving deal isn’t reached.

But Democratic Gov. Ned Lamont said he is prepared to sign the budget into law and accused GOP leaders of political grandstanding.

And Lamont’s budget director, Office of Policy and Management Secretary Melissa McCaw, said Republicans overstated the amount of savings that needs union approval, adding she nonetheless expects a deal to be finalized in the next 30 to 45 days. 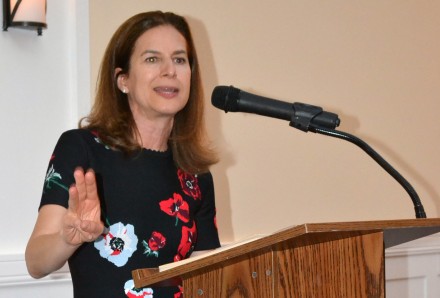 Lt. Gov. Susan Bysiewicz was keynote speaker at tonight’s fifth annual First Citizen Award dinner held by the Westport Weston Chamber of Commerce at the Westport Inn. She said good news has just come forward about the state. “Bloomberg just named Connecticut the fourth most innovative state” and Standard & Poors “has upgraded the state from stable to positive.” Nonetheless she said the state “must go on a debt diet,” so that there can be a 30% reduction of the budget spent on debt each year. (CLICK TO ENLARGE) Contributed photo 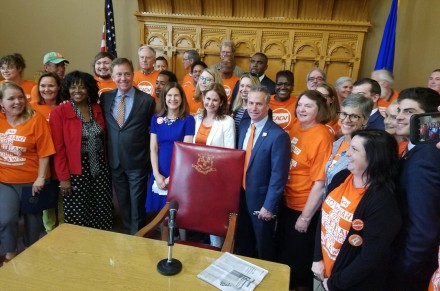 Westport Selectwoman Melissa Kane (c., behind chair) was among those on hand today as Gov. Ned Lamont (3rd l.) signed two gun safety bills. Kane is board president of CT Against Gun Violence. Also there but not pictured was state Rep. Jonathan Steinberg of Westport. One of the bills bars gun owners from leaving a handgun in an unattended motor vehicle unless the firearm is secured, while the other regulates 3D-printed firearms and bans so-called “ghost guns” without serial numbers. (CLICK TO ENLARGE) Contributed photo

To no one’s surprise, Gov. Ned Lamont said today he will use his authority to call the General Assembly into special session this summer in a renewed effort to return tolls to Connecticut’s highways. There is no guarantee, however, legislators will answer that call.

House Speaker Joe Aresimowicz, D-Berlin, supports the use of tolls to finance the modernization of the state’s aging transportation infrastructure, but he warned that the governor and his allies need to regain the public-relations battle lost to opponents.

“At best — at best — tolls are a 50-50 proposition in this state,” Aresimowicz said. “And those that are working very hard to disrupt that are putting a lot of misinformation out there.”

Aresimowicz’s comments reflect a belief among lawmakers that the Lamont administration botched the rollout of tolls in February, giving Republicans, the trucking industry and others an opportunity to frame tolls as just another demand on residents.

The 2019 legislative session ended at midnight Wednesday. As usual, some folks came out of the process happy. Others are already plotting their strategies for next year.

The impact of these decisions will take years to determine. But here’s an early assessment of who came out ahead and who didn’t.

Cities and towns: The state budget for the fiscal year that begins July 1 slightly increases the $2.3 billion in aid that cities and towns get each year. The education grant program that accounts for most of the state’s municipal aid will rise by 2 percent next year. And Gov. Ned Lamont’s plan to send some towns a bill to help cover teacher pension costs got shelved.

State employees: After granting concessions in 2009, 2011 and 2017, unionized state employees were asked by Lamont to accept new limits on the annual inflation increase for their pensions. They declined that request.

Lawmakers tonight sent a bill to Gov. Ned Lamont’s that requires law enforcement to change the way they publicly release information after use-of-force incidents and prohibits police officers from firing into fleeing vehicles.

The bill, which was approved in the House of Representatives on a 86-60 vote, requires dashboard camera recordings be made available to the public within 96 hours of an incident; establishes a task force to make policing more transparent and accountable; and charges the Police Officer Standards and Training Council with studying and reviewing officers’ use of firearms during their pursuits of suspects.

It also requires law enforcement agencies to issue an annual use of force report to the state Office of Policy and Management.

“Information is power, and this transparency bill is a necessary first step toward placing power over police squarely where it belongs: with the people. No one should die or be harmed at the hands of police, and police should not be able to hide the number of times they hurt, kill, or threaten people,” American Civil Liberties Union of Connecticut Executive Director David McGuire said in a statement.