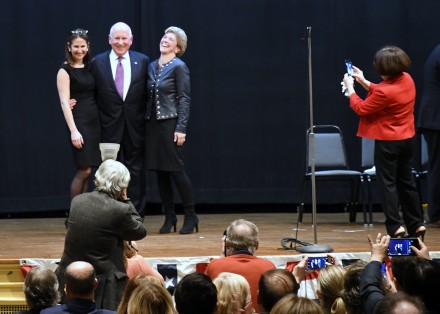 Lt. Gov. Nancy Wyman said today she will not run for governor in 2018, ending months of personal contemplation and political calculation.

Her decision deprives the Democratic Party of its highest-profile contender, while sparing it from a campaign that could have struggled to emerge from the shadow of an unpopular incumbent, Gov. Dannel P. Malloy.

Wyman, 71, is a popular figure among Democratic insiders and the winner of six statewide elections, four as comptroller and two as lieutenant governor.

She said she finalized her decision Monday after months of talks with family and friends about the potential costs and benefits of trying to succeed Malloy as governor.

U.S. Congressman Jim Himes is scheduled to be at Westport’s Unitarian Church Tuesday to address Indivisible Connecticut District 4 (ICT4) the local branch of a national group opposed to the agenda of President Trump and Vice President Pence.

Himes is expected to share his views on the political environment in Washington, D.C., Trump’s tax plan, the Russia investigation, recent election results, “and how grassroots organizations can bring about effective and meaningful change,” according to ICT4 organizers.

Event planners say seating preference will be given to those who have pre-registered online at http://www.ICT4.org.

Washington – The Senate decided to go its own way in overhauling the nation’s tax code, and its plan would have a different impact on Connecticut taxpayers than a similar House bill.

The Senate bill would push back for a year President Donald Trump’s top priority of cutting the corporate tax rate from a maximum of 35 percent to 20 percent.

Holding off implementation of the new rate would lower the cost of the bill by $100 billion, but it also would delay the GOP’s plans to entice businesses to move offshore operations back to the United States.

The biggest changes affecting individuals in Connecticut is the bill’s elimination of the deductibility of property taxes. The House plan would allow deducting these taxes up to $10,000.

Both major Westport parties were determined to turn out more voters in Tuesday’s election.

The Democrats repeatedly said their key to victory was getting those who don’t usually vote in municipal elections to do so this year.

But their efforts failed. Turnout was about 47.5 percent, almost the same as four years ago. That number represents 8,502 voters.

The Town Clerk’s Office was crowded on Saturday before the election, the last day to pick up absentee ballots. 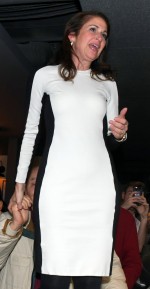 Democrat Melissa Kane told supporters today her loss in the first selectman’s race was tough but “we have moved the dial.”

In a Facebook posting, she echoed her comments to supporters Tuesday night that victorious First Selectman Jim Marpe “knows there are people out there he has to do more for.”

“It’s tough to lose a race,” said Kane in the posting. “But we won in many, many other ways. We have moved the dial.

“New voices came together and were heard. So many more people are involved in the process. And our entire superb down tkt D slate won.”

What began as an almost somber scene at Republican headquarters around the time the polls closed tonight, ended in a loud and jubilant celebration thanks to the projected win of incumbent First Selectman Jim Marpe and his running
mate Jennifer Tooker. 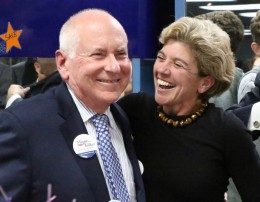 Jim Marpe and jennifer Tooker share a laugh as they celebrate their win tonight.  (CLICK TO ENLARGE) Dave Matlow for WestportNow.com

“I am humbled by the honor of being re-elected as your first selectman,” Marpe said, “and grateful that you have seen fit to grant me another four years of this awesome responsibility.”

According to unofficial figures called in to the campaign headquarters, Marpe was projected to have taken just under 50 percent of the overall vote in what was a tight and sometimes emotional political race with Democrat Melissa Kane. (See complete list of unofficial returns HERE.)

Petitioning candidates John Suggs and Timothy Elgin finished much farther behind either major party candidate in a local election that was projected to include about half of Westport’s registered voters by the end of the evening. 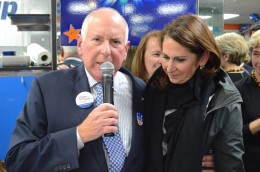 Kane and running mate Rob Simmelkjaer — who lost by 452 votes out of 8,380 cast in the first selectman’s race — visited the Republicans to congratulate them and then made their way to The ‘Port restaurant, also on Post Road West, to thank their supporters.

Standing on a tabletop, Kane said: “It’s going to be OK. Mr. Marpe knows there are people out there he has to do more for ... All I really care about is that Westport comes together and that we do the best for Westport.” 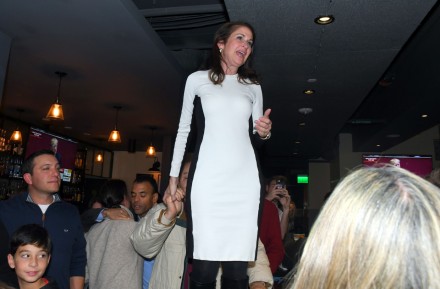 Democratic First Selectman candidate Melissa Kane thanks supporters tonight at The ‘Port Restaurant after losing to incumbent Republican Jim Marpe. “It’s going to be okay,” she said. “Mr. Marpe knows there are people out there he has to do more for … All I really care about is that Westport comes together and that we do the best for Westport.” Earlier, Kane and running mate Rob Simmelkjaer visited Republican headquarters to congratulate them. (CLICK TO ENLARGE) WestportNow.com photo