The Westport Board of Finance tonight voted for a $2,050,000 cut in the Board of Education budget and approved a total school and municipal budget of $207,703,868, representing a 1.3 percent increase over the current year.

The Board of Education will have an opportunity to return next week to seek any restoration in the cut, which was approved 6-1 (Lee Caney opposed). It then moves next month to the Representative Town Meeting (RTM), the town’s 36-member legislative body.

The Board of Finance action followed word from Superintendent of Schools Colleen Palmer that cost savings of $1.3 million to $1.5 million would be achieved by the school bargaining units joining the state health plan.

New Canaan — The fifth and final episode of a road show produced by Connecticut Republicans and starring an evolving cast of gubernatorial contenders came to an end tonight without resolving a key plot point: Is the GOP any closer to settling on a front runner? 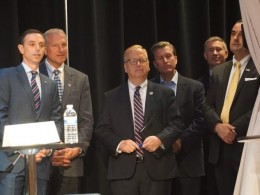 With nine candidates on stage and a cumulative limit of 12 minutes allotted to each to answer questions, Republicans in the audience could only get a sampling of the personalities and policies of the politicians whose next task is to compete for the support of the 1,100 delegates to the GOP nominating convention.

“Someone on the stage is going to be our nominee,” Republican State Chairman J.R. Romano said after the nine delivered closing messages to a crowd at Saxe Middle School that was dotted with delegates to the two-day convention that opens May 11 at Foxwoods Resort Casino.

New Britain Mayor Erin Stewart, a late entrant into the race, might disagree. Falling short of the $175,000 mark in campaign contributions required for an invitation, Stewart was absent. Bob Stefanowski, a former business executive who intends to bypass the convention and petition for a spot on the primary ballot in August, has skipped all five forums.

State Sen. Toni Boucher announced today she will seek reelection in the 26th District, which includes Westport, and end her exploratory bid for the Republican nomination for governor. 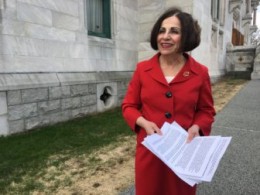 Sen. Toni Boucher announces the end of her exploratory campaign for governor outside the Capitol. Clarice Silber for CTMirror.org

Boucher had gotten little traction in her exploratory bid but did announce she had almost $98,000 on hand as of April 1. She made a similar exploration in 2014, then ran for re-election.

She said she would be able to transfer a portion to her reelection campaign and qualify for state funding.

Boucher’s decision was not unexpected. Her fundraising had lagged, falling short of $15,000 in the most recent quarter. Her total fundraising of $97,465 fell far short of the minimum to participate in all but the first two of the five GOP gubernatorial forums.

Attorney General George Jepsen today strongly warned the legislature against allowing the Mashantucket Pequot and Mohegan tribes to jointly develop a casino in East Windsor without the approval of the U.S. Interior Department.

The approval was a condition of a 2017 law permitting the project to compete with MGM Springfield.

The opinion is likely to be the final blow in this legislative session to any hopes by the tribes to circumvent the requirement for Interior Department approval.

In a formal opinion sought by House Speaker Joe Aresimowicz, Jepsen said his office still views approval by the Interior Department of amendments to the state’s gaming compacts and memoranda of understanding with the tribes as necessary to guarantee the new project would not jeopardize Connecticut’s existing revenue-sharing arrangement with them.

Washington – Sen. Chris Murphy today had some of Capitol Hill’s harshest criticism of U.S. air strikes on Syria, calling them “illegal,” and counterproductive, leading to more attacks by Bashar al-Assad on the Syrian people and “a bloodier, more brutal war.”

Other Connecticut lawmakers were more supportive of the strikes, but called on the White House to seek authorization from Congress for further military action and devise a “comprehensive” strategy on Syria.

Murphy’s criticism of President Donald Trump’s decision to strike Syrian targets Friday night was based both on the military strategy of the operation and on the president’s failure to secure approval from Congress for the attacks.

“The precedent that Trump has set by taking out another large-scale strike without prior public debate should scare every member of Congress and every American,” said Murphy, a member of the Senate Foreign Relations Committee. 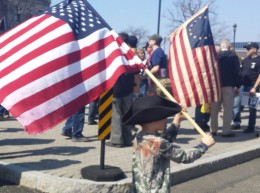 The rally, organized by the Connecticut Citizens Defense League, a gun advocacy group, was in response to the backlash against pro-gun groups and gun-control sentiment in the wake of the Parkland, Florida high school shooting in February, CCDL event coordinator Holly Sullivan said.

“Right now there’s a particular anti-gun sentiment, so it was the right time,” Sullivan said. “Our membership was calling for it. People were asking for it, and at the end of the day, that’s what we’re here for.”

In what Sullivan described as a “healthy turnout,” a crowd estimated at nearly 2,000 people gathered on the capitol lawn, many of them bearing American flags, colonial flags, and Gadsden “Don’t tread on me” banners.

UPDATE Dollars are swirling in the race for the state’s 26th District Senate seat.

Democrat Will Haskell, a Staples High School graduate, raised $29,013 during March, according to his first financial disclosure statement filed with the State Election Enforcement Commission (SEEC).

Sen. Toni Boucher, the Republican incumbent who is likely seeking reelection, raised $15,000 during that period.

At the same time, Boucher, who has announced she is exploring seeking the Republican nomination for governor, has an approximate $98,000 exploratory committee campaign war chest she said is “legally allowed to be transferred to the state senate” race.

The League of Women Voters of Westport (LWVW) will host a panel of 18 gubernatorial hopefuls from throughout the state on Saturday, April 21, in the Town Hall auditorium.

The event, running in conjunction with the townwide Maker Faire, will run from 12:30 to 2 p.m.

Each candidate, Republican, Democrat, independent or unaffiliated, will have an opportunity to describe his or her vision for the state, and each will have his or her photo and biography posted on the LWVW website, officials said.

Among the candidates is Westporter Marisa Manley, independent candidate for governor. Another Westport candidate, Steve Obsitnik, who is seeking the Republican nomination for governor, is unable attend because of a schedule conflict, a LWVW spokeswoman said.

Ned Lamont, the wealthy Greenwich businessman who electrified progressives with an antiwar challenge to Sen. Joseph I. Lieberman a dozen years ago, today easily won a straw vote for governor at the Connecticut AFL-CIO’s political convention, an unusually early effort by labor to shape the crowded race for the Democratic nomination in a pivotal election year.

The 48-percent vote was a boost for Lamont, who also won the loudest applause of the five Democratic gubernatorial candidates, but it was not nearly strong enough to convince delegates to attempt to make a formal endorsement. A two-thirds vote is necessary to make an endorsement, something that might be difficult before the primaries in August.

But labor is intent on trying. Its leadership pointed to a Republican gubernatorial field that snubbed labor’s invitation to address 216 delegates from 67 union locals in Hartford. The leaders see that as a reflection of a GOP intent on weakening collective bargaining rights for public-sector workers, especially as they apply to pension and health-care benefits.

Gov. Dannel P. Malloy today nominated Associate Justice Richard A. Robinson of Stamford to become chief justice of the Supreme Court, tapping a nominee first appointed as a lower-court judge by a Republican.

Justice Richard A. Robinson and his wife, Nancy. (CLICK TO ENLARGE) Mark Pazniokas for CTMirror.org

If confirmed by the legislature, Robinson would be the first African-American leader of the state’s highest court.

The governor also nominated Judge Steven D. Ecker of New Haven to succeed Robinson as an associate justice Supreme Court and five others, including former state Sen. Eric D. Coleman of Bloomfield, to the Superior Court.

The nomination of Robinson as chief justice is bittersweet for the Democratic governor, who has taken pride in making the judiciary more diverse.