If anything, Westport and its people showcased their time-honored reputation for grit and perseverance in 2019.

Their tenacity oftentimes seemed against the wind on myriad issues from schools to environmental concerns to affordable housing to bids for elected office — to even fighting a cellphone ticket.

Whether it was the continual debate about the $32 million renovation of Coleytown Middle School (CMS) scheduled to open in August 2020, Summit Saugatuck’s seventh try for a housing complex, banning plastic straws and Styrofoam to finally getting the Westport Library to be what the townspeople wanted, not backing down seemed de rigueur.

What makes up Westport’s indefatigable doggedness?

Many had long, accomplished lives, either in their homes, careers and/or volunteer activity that greatly gilded Westport’s quality of life.

Others the town lost in 2019 were taken too early, either at the starting gate of adulthood or barely at midlife. Yet all still made their mark on the town though taken too soon.

The following is a look at just some of those who died in 2019, leaving their own, distinctive legacies making the town a better place:

As has been our tradition on the first day of the year, WestportNow presents a pictorial look back at the year just ended.

Now in our 16th year of publication, we are deeply grateful for the support shown by our readers and advertisers — more important than ever to have an independent, expert hometown news source focused only on Westport as others spread their dwindling resources over multiple communities resulting in less coverage here.

We urge you to support our advertisers and thank them for helping make WestportNow possible. And we always welcome more.

As 2018 comes to a close, a look back shows how Westport was tested with epic struggles and a loss of innocence, perhaps.

The challenges were not just financial in the wake of the state’s fiscal malaise. In fact, town officials met those tests well. Westport’s Board of Finance in May unanimously kept the mill rate flat.

The challenges were cultural, too, as Westporters kept their eyes on quality of life issues.

Coleytown Middle School’s (CMS) mold problem and the ensuing shifting of students and grade levels as a school remains shuttered still pose the big question: how to maintain a stellar education amid an infrastructure crisis.

From the celebrated to the lesser known, from the those with storied, long lives to the wonderful ones cut short, Westport saw the loss in 2018 of many who had an important impact on our town, state, even country.

Either through their humble works or epic achievements, they forged a sense of good will and a loving sense of community. Their legacies live on. Here are some of them:

James R. McManus, founder in 1971 in Westport of Marketing Corporation of America (MCA), died Jan. 10 at his home in Fairfield. He was 84. Known merely as Jim around town, his laid back, casual demeanor belied his iconic status in the marketing industry, much of it centered in Westport.

He also donated generously to local nonprofits, including the Westport Library, whose McManus Room is named for him. 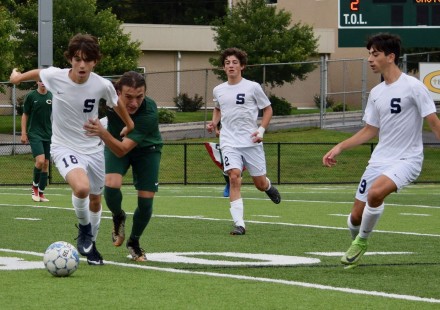 A strong second half lifted Staples’ boys soccer team to a 4-0 win over Trinity Catholic today at the Crusaders’ field. Patricio Perez Elorza, Matthew Tanzer, Lefty Penderakis and Brendan Lynch all scored, with two assists from Sam Liles, and one from Josh DeDomenico. The Wreckers, now 2-0-1, travel to Wilton Monday for a big 6 p.m. match. In this photo, DeDomenico races past a Trinity defender. (CLICK TO ENLARGE) Armelle Daniels for WestportNow.com

(Editor’s Note: Because of questions and concerns about the possibility of medical marijuana dispensaries coming to Westport, WestportNow offers the following Q&A to help clarify the issue.)

Q: How many medical marijuana facilities are there in Connecticut? 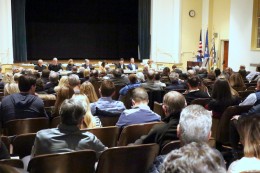 In March, a large crowd was on hand for a P&Z meeting and discussion of medical marijuana dispensaries. (CLICK TO ENLARGE) Dave Matlow for WestportNow.com

Q: Why are operators of medical marijuana dispensaries interested in Westport?

A: The P&Z on June 1, 2017 passed its own text amendment 735, which allows no more than two medical marijuana dispensaries in town. The decision came after a P&Z committee spent two years holding sparsely attended public hearings. The rationale for the amendment was that if the P&Z did not pass the regulation, the state could force such dispensaries on the town. The reason for two dispensaries was to minimize price fixing.

As has been our tradition on the first day of the year, WestportNow presents a pictorial look back at the year just ended.

Now in our 15th year of publication, we are deeply grateful for the support shown by our readers and advertisers – more important than ever to have an independent news source in Westport as others close or cut back. We urge you to support our advertisers and thank them for helping make WestportNow possible. And we always welcome more.

Many of the photos here are from our readers, for which we are very grateful. When you see something newsworthy, please submit contributions to .(JavaScript must be enabled to view this email address). And join us on Facebook, Twitter (@westportnow), and Instagram, where you can add #westportnow.

As in past years, 2017 was marked by changes aimed at maintaining Westport’s quality of life, and at the same time the witness of the town’s national, even international prominence.

The international spotlight burned brightly this year from Justin Paul, a 2003 Staples High School graduate, winning an Academy Award for Best Original Score for “City of Stars” from the film “La La Land” and two Tony Awards for “Dear Evan Hansen,” to resident Scott Gottlieb, a physician, picked by President Donald Trump to head the Food and Drug Administration (FDA).

Westport also drew worldwide attention for its TEAM (Together Effectively Achieving Multiculturalism) Westport essay contest in which the prompt was about white privilege.

In a town predominantly white and privileged, the prompt stirred controversy, with some here saying it inculcated white guilt by race baiting.

In 2017, Westport witnessed the loss of a number of individuals who made profound, positive changes on local, regional and national levels.

Artists, journalists, scientists, social justice pioneers, and educators, as well as those whose achievements through humble works and good will forged a welcome sense of community are all among the town’s notable deaths.

The following is a look back at some whose larger-than-life legacies live on: (Full obituaries of each can be found in the WestportNow obituary section.)

Glenn Hightower of Westport, who served three decades as principal at Bedford Junior High and Middle Schools and later as principal of Westport Adult and Continuing Education, died Jan. 1 at home. He was 76.