The office buildings at 8 and 10 Wright St. overlooking Westport’s downtown have changed hands for more than $30 million, almost double the purchase price five years ago. 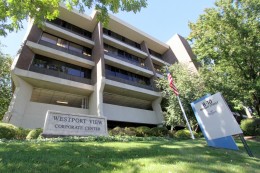 The seller, Boston-based Marcus Partners, said it invested more than $5 million in a large-scale capital improvement program in the buildings, including renovation and upgrades of the lobbies and all common areas. The Town Clerk’s Office said the sale was recorded on June 28 for $30,021,500.

Marcus Partners said the property is currently 94% leased and consists of two office buildings totaling 83,964 square feet. The buyer was identified as WFF Westport TT LLC, a Boston-based firm of Waterway Capital, LLC, according to the sale documents.