Touting a message of passion and perseverance, four female entrepreneurs from Westport tonight shared their experiences about opening and running their local businesses. 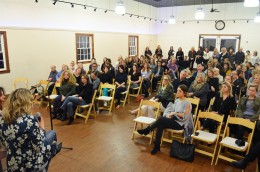 It was standing room only for the women’s entrepreneur event at the Playhouse. (CLICK TO ENLARGE) Jarret Liotta for WestportNow.com

“Jumping Off: Women Entrepreneurs Share Their Stories” was held at the White Barn at the Westport Country Playhouse, hosted by the Westport Library and moderated by Selectman Jennifer Tooker.

“So many of the businesses in this town are women-owned, and that says a lot,” noted Shapiro, who at 57 finds herself happily following a new dream.

“What’s the worse that happens? It doesn’t work … You just have to give it a try,” said the daughter of the late entertainment legend Eartha Kitt.

“Certainly as women we reinvent ourselves so many times during our life,” she said.

Reasons differed as to why each entered into their particular business, yet all agreed that — while not an easy journey — it was a very fulfilling one and something that has given significant meaning to their lives.

“You can change yourself and you can do something completely different,” Shapiro said, noting it is also a great message to transmit to her children.

Likewise, Mountain spoke about her children witnessing her as an entrepreneur. 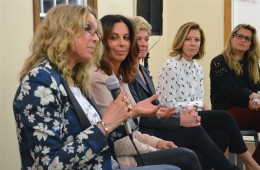 “This is really part of the upbringing I want for my kids … I am not just a mom,” she said. “I am not just a wife. I am my own individual person and I must do this to fulfill my (dreams).”

She and Noorily have realized major success since 2013, with six restaurants currently in operation and more potentially coming, possibly nationwide.

Before they began, Noorily said, “We started to talk to people and tell them what we were doing and we were told, ‘You’re crazy.’”

“There’s a lot of fear,” Mountain said, and for several days the two backed out of the plan to open the first restaurant.

Friendship motivated a lot of their efforts — an opportunity to be involved in a project together — but they were also drive by a need for purpose.

“I need to do something,” Mountain said, besides just be a wife and parent. “That’s what really drove us.”

Still, the group agreed that support from friends and family was paramount.

Shapiro, who dreaded seeing her favorite store — West — close down in what has become her beloved hometown, joked sharply about the financial aspects of support.

“It takes a village,” Noorily said, noting that a support system was key.

“I have an extremely supportive group of people in my life,” said Camche.

Along with recounting some of the motivations behind their journeys, participants talked about confronting the practicalities as well, such as the prohibitively high cost of rents on Main Street.

She and Mountain also shared some anecdotes about their struggles to get loans — blocked by hurdles that didn’t appear to block men in similar situations.

Still, the rewards — that include mentoring other women who have found inspiration through their individual success stories — keep adding to their satisfaction.

“I love when young people come in and ask me questions,” said Camche, who founded her store 18 years ago. “I love teaching. I love mentoring.”