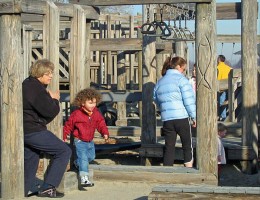 Volunteers are needed to help build a new playground at Westport’s Compo Beach. It will replace the current playground that has been enjoyed by children for 16 years. (CLICK TO ENLARGE) Phyllis Groner for WestportNow.com
By .(JavaScript must be enabled to view this email address)

The Westport Compo Beach Playground Committee is looking for a few good men and women to help with construction in April.

The committee has raised nearly enough money for a project to replace and build a new playground at the beach, but volunteers are needed to help with building the playground.

Rebecca Ellsley, committee co-chairwoman, said there is a meeting planned for Jan. 25 to organize the project, and 1,500 volunteers are needed by that time. There are 650 names currently on the volunteer list.

Those who volunteer do not need to commit to a specific time, but just need to say they are available to help during the building on April 25-30.

“You just need to say you can work at least one four-hour shift,” she said. “You don’t have to be a skilled craftsman either, but we could use those people.”

People will be guided in doing work, Ellsley said, but people are needed to help organize food distribution to the crews, running materials and raking the site.

Those wishing to volunteer can sign up on via the project’s Web site.

The playground is being replaced in a community effort similar to one done to build the original playground 16 years ago, and the Westport Representative Town Meeting voted to accept the new playground as a gift earlier this week.

Parks and Recreation Director Stuart McCarthy said town officials has expected to replace the playground themselves, but instead they will only be paying for the removal of the old playground for about $35,000.

The committee is privately funding the nearly $200,000 necessary to build the new playground, he said.

The old playground has run its life expectancy, he said, and there are splintering problems now.

Suzanne Dodge, committee chairwoman, said the group wants to relive the experience of 16 years ago with the first playground construction.

“We want this to be like an old-fashioned barn-raising,” she said. “We’d really regret if we had to put off doing the construction because we didn’t get enough people.”

Ron Malone, RTM District 6, said everyone lives complicated lives, but if they wanted to see something different they should watch the children at the playground.

“It’s gratifying to see them enjoying themselves,” he said.

Kim Mathias, RTM District 9, said while you see many of the older children on the fields playing sports throughout town, it’s the preschoolers on the playground.