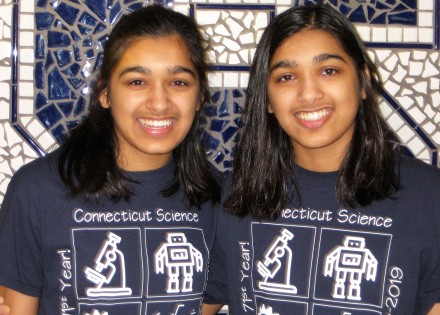 Identical twins  Anisa Verma Prasad (l) and Sirina Verma Prasad today were named top Staples High School scholars for the class of 2019. Anisa is salutatorian while Sirina is valedictorian. Their route to the top began in first grade, at Greens Farms Elementary School. Their parents had moved to Westport from London, where their father, Gautam, worked in financial services. Their mother, Nita, is a professor at Quinnipiac University. Remarkably, this is not a first for Staples. In 2011, twins Eric and Todd Lubin were number one and two in their class, respectively. (CLICK TO ENLARGE) Contributed photo