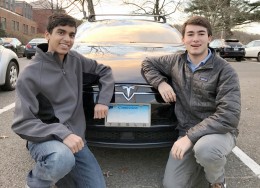 Neal Soni (l) and Dylan Diamond with a Tesla they can control from their too. (CLICK TO ENLARGE) Ellery Saluck for WestportNow.com

Junior Neal Soni and senior Dylan Diamond have created their very own app called Tesla Toolbox. It allows owners of the electric car Tesla to track their speed, route and power usage.

It also lets them control features like lights, the locking and unlocking car doors, the opening and closing garage doors, even climate control.

Users can also start their Tesla or drive it forward or backward without being in it, but with the mere touch of a iPhone.

The app sells for just $5.99, and there are currently 1,200 in use worldwide, according to Neal and Dylan.

“It all started when my parents got a Tesla, and there was already a built-in app made by the Telsa company, but it was pretty limited,” said Dylan. 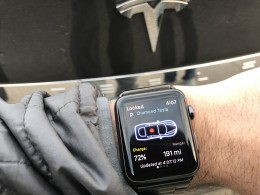 The Tesla Toolbox app allows users to interact with their Tesla from their Apple watch. (CLICK TO ENLARGE) Ellery Saluck for WestportNow.com

“There was no support for Apple watch, and it didn’t have the latest iPhone features,” he added.

What followed was an idea for AP computer science project last spring. Dylan teamed up with the goal of creating an app that was “oriented towards the Apple watch and has a more intuitive interface on the phone.”

Dylan focused on development, while Neal worked on the design and the app’s graphics.

“We looked at other car apps, and we took the best parts of them and incorporated them into Tesla Toolbox,” said Neal.

“For example, one thing that is useful for commuters especially is that from the train, you can turn the heat on in your Tesla parked at the station.” 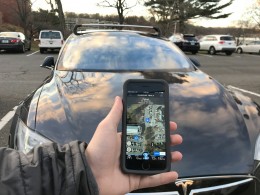 The Tesla Toolbox can pinpoint the location of the owner’s Tesla. (CLICK TO ENLARGE) Ellery Saluck for WestportNow.com

Other important features of the app include support for multiple Teslas per owner and its detailed graphs of power usage, especially important for electric car owners.

After completing the project, the two said they decided to improve on the app over the summer, including making it available across international platforms. In October, they launched the app.

“Teslas are more computer than car,” Dylan said, and it’s all connected via satellite and WiFi.

“So Teslas are constantly sending information to Tesla servers, and with our app, you just log in with your Tesla account,” he added.