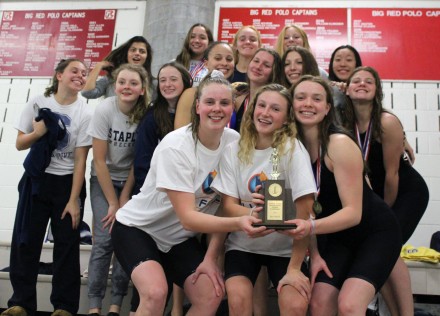 Staples Girls Swim and Dive took third place tonight at the FCIACs with 288 points just behind Greenwich placing second with 303 points, and Darien placing first with 335 points. In the 200 medley relay, the team of Esme Hunter, Annie Bowens, Ella Alpert and Sophia Mechanic took fourth. In the 200 free Morgan Lenoce took second place with Jessica Qi at fourth. In the 200 IM Esme Hunter placed third with Hannah Strauss at eighth. The 50 free saw Annie Bowens at seventh and in the 100 fly Ella Alpert placed seventh. Staples had three swimmers in the A final of the 100 free with Qi placing second, Strauss at sixth and Mechanic at eighth. Lenoce took eighth in the 500 free. In the 200 free relay the girls placed second with the team of Hunter, Qi, Bowens, and Lenoce. Esme Hunter placed first in the 100 back, and the girls took fourth in the 400 free relay with the team of Lenoce, Mechanic, Strauss and Qi. Pictured: the Staples girls team holds the third place award. (CLICK TO ENLARGE) Contributed photo