Timmy Liles scored in the fifth minute and his Staples boys soccer teammates made the goal stand up, shutting out unbeaten Norwalk 1-0 today in front of a large home crowd at Loeffler Field. 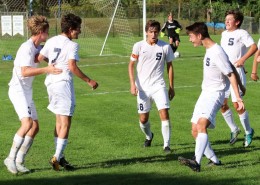 Coupled with Staples’ 1-0 defeat of reigning FCIAC co-champ Greenwich two days earlier, it was an excellent 48 hours for the Westporters.

Liles’ goal began with an outlet from keeper Ry Cohen. Anton Mahr skimmed it forward. The senior midfielder did the rest, finishing smartly from just inside the box.

“It’s been quite a week,” said head coach Dan Woog. “The weather’s been hot; we’ve faced two very strong teams, and we’ve been able to play our game. My hat is off to our guys. They’ve done a ton of work.”