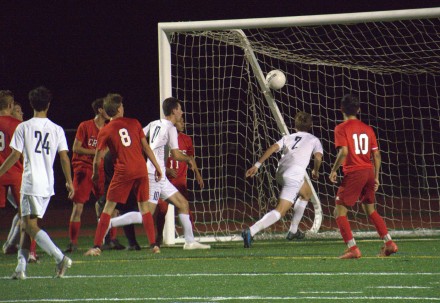 Benny Feuer scored on a header (as shown in photo), off Emerson Anvari’s feed, to give Staples a 1-0 lead over Wilbur Cross in today’s first-round state tournament game in New Haven. But a red card to the goalkeeper (for handling the ball outside the box, to prevent a goal scoring opportunity) forced the Wreckers to play the final 41 minutes a man down. Yet they continued to control the match, and added two second half goals. Brendan Lynch scored, assisted by Patricio Perez Elorza, and George Smith’s shot was deflected in by a defender. The 3-0 victory advances Staples to the second round. They travel to Glastonbury, to face the No. 1-seeded Tomahawks on Wednesday. Kickoff is 2 p.m. (CLICK TO ENLARGE) Christina Bassler for WestportNow.com