Car buffs are gearing up for the first Concours d’Caffeine classic car show in Westport’s Saugatuck area on Sunday. 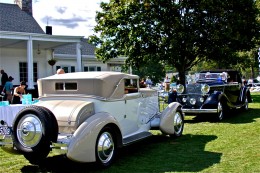 The 8 to 11 a.m event is a mini-version of the Concours d’Elegance returning to Westport after a four-year absence. It is co-sponsored by the Westport Weston Chamber of Commerce (WWCC) and Fairfield-based Concours Consulting Partners.

Held on Railroad Place, the gathering of classic and modern day vehicles will underscore Connecticut’s role in automotive history, as well as Saugatuck’s, according to event organizers. The Board of Selectmen approved the plans on April 8. (See WestportNow April 8, 2015)

Following the event, participants are set to head out on a rally around Fairfield County, ending up in Redding.

The event will showcase myriad eye catching cars expected to fill the streets and parking lots adjacent to the Westport Metro-North train station.

A featured vehicle will be the late Paul Newman’s Trans AM Camaro No. 77 car that he raced from 1997 through 2001.

They are the same Westporters who put together the Concours d’Eligance, which ended its Hunt Club run in 2011 after it outgrew the venue.

“The Concours d’Caffeine combines the relaxed atmosphere of a Sunday cars and coffee and the excitement of a Concours-style event,” said Taylor.

“It allows proud vehicle owners to show their cars and interested guests to see those and a focused display of Concours class vehicles.”

Matthew Mandell, executive director of the WWCC, said the Saugatuck venue was an appropriate one.

He said that in 1905, the Saugatuck-based Toquet Motor Car and Construction Company, a manufacturer of automotive parts, built a few five-seater touring cars.

Mandell said that Connecticut made cars on display will include the classic Pope Hartford, Bridgeport Locomobiles, classic Trumbulls and the more recent Fitch Phoenix and Sprint, and the Cunningham C3 designed by Briggs Cunningham, a Westport race car driver.

Following the event, classic car owners are scheduled to rally at 11 a.m. while visitors can explore Saugatuck.

One thought on “Saugatuck Sunday: Cars, Caffeine and a Concours”