After 16 years of battling a developer to save their Hiawatha Lane Ext. neighborhood from a multifamily, rental housing complex directly across the street, Carolann Curry and her partner Selma Miriam last month had breathed a sigh of relief. 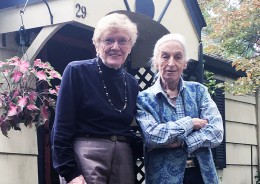 In a work session on Sept. 19, the Planning and Zoning Commission (P&Z) denied developer Felix Charney’s proposed 187-unit rental complex in the Saugatuck section of Westport near Exit 17 off I-95.

It was Charney’s seventh failed attempt — and the seventh and seemingly ultimate win for Curry and Miriam in preserving what Curry has called “the most closely knit neighborhood in the Town of Westport.”

Fronted by preexisting companies that include Gault, Inc. and Penna Construction, the mostly single-family, modest home community includes Ferry Lane West, Indian Hill Road, Davenport Avenue, West End Avenue and Gillette Circle Drive. The neighborhood was built in the 1950s to resettle the Italian American community that had been uprooted as the Connecticut Turnpike cut a swath through Saugatuck.

The P&Z denied Charney’s application, presented by his attorney Tim Hollister of Shipman & Goodwin in Hartford, for several reasons.

They included: insufficient pedestrian access across the road for the complex’s residents walking to and from the Saugatuck train station; fire safety; and the lack of secondary, firetruck access via a gravel road from Norwalk’s Avalon housing complex. The P&Z pointed out that Charney had not secured Norwalk’s approval for firetruck access over its wetlands to Hiawatha Lane.

But as Curry and Miriam sat down at their home last Tuesday for what originally had been planned as a celebratory talk about their long fought victory and their work with the neighborhood group dubbed Save Old Saugatuck, there was a growing uneasiness.

Even though Charney, principal of Summit Development in Southport, had been denied by the P&Z, a suit against the town under the state’s affordable housing statute 8-30g is in the wings. And important in his quiver is Norwalk’s possible approval for secondary fire access.

Under 8-30g, a developer can override local zoning laws if a municipality does not have 10% of its housing stock deemed affordable, which Westport at 4% does not. Charney proposal sets aside 30% of the 187 one- and two-bedroom units as affordable.

The only ways a town can get around 8-30g is to prove that the development would pose safety or environmental risks.

This was Charney’s seventh try since 2002 to build on the more than eight acres within walking distance of the Saugatuck train station. In early May, he told WestportNow.com that his eighth try will be in court.

“I’m here because I believe in this form of housing,” said Charney, a former Westporter and ironically, a former P&Z member who served from 1983 to 1985.

“They’re going to turn it down; this project will be resolved by the courts,” he added. “We believe that 8-30g is valuable legislation to encourage diversity of housing in the more affluent communities in the state.”

Curry, a resident of 29 Hiawatha Lane Ext. since 1988, Miriam’s home since 1962, feels that affordable housing is being used as a ruse.

“Here, we are affordable housing, and he’s going to destroy it,” Miriam said.

“The most compelling thing for me over the past 16 years was working that neighborhood for its preservation,” said Curry. “It’s the Curry family political drive.”

Curry was a founding board member of the Women’s Campaign School at Yale and has been a political appointee of mayors of both New Haven and Bridgeport, directing their welfare departments.

She served as an alternate on Westport’s P&Z from 2010 to 2014 but stepped down when she saw new applications coming forth from Carney.

Her partner Miriam is the founder and owner of the vegetarian restaurant Bloodroot in the Black Rock section of Bridgeport.

For the planned complex, Charney purchased five Hiawatha Lane homes, which he now rents, plus two acres from the state that had been used as emergency access from what had been I-95 toll stations.

“The message was clear from the beginning,” Curry said. “He wanted to make this neighborhood disappear. It was clear to us that Felix sees this not as a community, but as a commodity.”

Miriam blasted 8-30g, saying that it was crafted by Shipman & Goodwin, and that the state legislature dropped the ball in passing it in 1990. She said the law was designed to assist developers, “and once it passed, they (Shipman & Goodwin) held workshops for developers.”

She pulled no punches when discussing the firm’s attorney Tim Hollister, who is representing Summit Development.

Hollister has raised the ire of town officials with his published comments saying Westport’s objections to the affordable housing statute is based on racism. He also applied June 4 for a ruling to the state Department of Housing (DOH), claiming that Westport’s affordable housing moratorium points were incorrect.

Moratorium points, which are good for four years, allow municipalities to work on establishing affordable housing, “so we could be in better control of affordable housing,” First Selectman Jim Marpe said at the selectmen’s meeting.

“The most awful thing about this plan is that it would make it impossible for everybody in Westport to use our public roads because the plan has parking for 325 cars at the junction of Exit 17 off I-95, the train station, Route 33 and Route 139,” Miriam said.

“When it closed on Sept. 19, all the challenges were addressed, and all the reasons for rejection were listed,” she added. “It’s still not done because now he has gone over to the Conservation Commission of Norwalk. What’s his plan? I think he’s going to use it in court.”