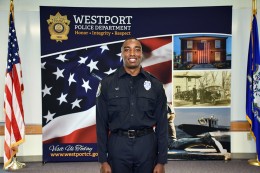 Officer Carr previously worked at the Windsor Police Department, where he has served with distinction since November of 2018, police said. He is a 2018 graduate of Western Connecticut State University in Danbury, where he earned a bachelor’s degree in justice and law administration.

According to Lt. Anthony Prezioso, Carr will have to successfully complete a modified field training and familiarization program and to learn department policies and procedures before being assigned to a patrol division.

“Today we are very excited and proud to welcome Officer Carr to our Westport Police Department family,” said Koskinas. “He brings with him an impressive educational background and the valuable experience derived from serving another community, both of which will serve him well as he transitions into his new role.”