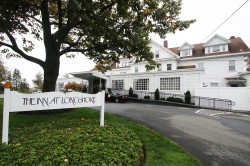 The Inn at Longshore. (CLICK TO ENLARGE) Dave Matlow for WestportNow.com

First Selectman Jim Marpe announced today that the town is considering a new tenant for the Inn at Longshore as Rory Tagert, the inn’s operator for 35 years, has announced his retirement.

Tagert is asking that the town assign the lease to hotel and restaurant operators known as Longshore Hospitality LLC, a partnership led by the Greenwich Hospitality Group.

“I am pleased to announce that the Board of Finance and Board of Selectmen will be considering an exciting proposal regarding the Inn at Longshore,” Marpe said, adding that Tagert, has served the town “with distinction.”

The current lease runs for another eight years and provides for the right of the tenant to assign the lease with the town’s approval, according to the announcement.

According to Marpe, Longshore Hospitality LLC has extensive experience in hospitality operations. Founded by Charles Mallory, the company’s CEO, of Greenwich, the company operates boutique hotels in a number of states. In Connecticut, its operations include Delamar hotels in Greenwich, Southport and West Hartford, along with the L’escale and Artisan restaurants at those locations.

Another principal, Michael Ryan, is a Westport resident. Longshore Hospitality has been represented by Jim Randel, a Westport attorney, during the negotiations.

“I feel comfortable and gratified that the Inn at Longshore will be in the hands of experienced, local, and reputable businesspeople who will represent the town well in the years ahead,” Marpe said.

The announcement said Longshore Hospitality LLC plans to continue operating the inn and the banquet facility. It said that hotel and event staff are proposed to remain in place and all scheduled events will be unaffected. The Pearl at Longshore restaurant will continue to stay open, it said.