It was a packed house tonight for what the Coalition for Westport (CFW) hopes is the first in a series of community forums focused on the future of downtown. 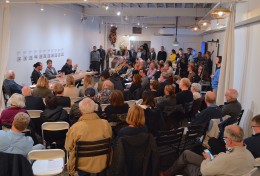 About 75 persons tonight attended the Coalition for Westport’s forum on the future of downtown, held at The Visual Brand on Church Lane. (CLICK TO ENLARGE) Jarret Liotta for WestportNow.com

The event by the CFW, a nonpartisan political party focused on Planning & Zoning matters in Westport, was held at the office of The Visual Brand on Church Lane.

The company is operated by Randy Herbertson, president of the Westport Downtown Merchants Association, who was also a panelist.

About 75 persons were in attendance, including town officials, developers, retail landlords and citizens.

They also heard comments from David Kooris, deputy commissioner of Connecticut’s Department of Economic and Community Development, and Joseph McGee, vice president of The Business Council of Fairfield County.

McGee shared some of the more alarming and out-of-the-box thoughts, cautioning that the town was unprepared for imminent changes and their impact, including global warming.

“Climate change is real,” he said, noting that rising water levels will not only impact the shoreline but properties along the river.

He also said that, while the town should focus on what aspects of its character make it special — and preserving those — it also needed to become more flexible with increasing its housing stock, particularly with smaller dwellings and more mixed-income housing. 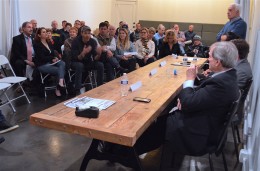 Developer David Waldman, third from left, vents his frustrations about the hurdles he faced in making his Bedford Square project a reality after 15 years, owing to “so many layers of bulls**t we have to put up with” in terms of town governing bodies. (CLICK TO ENLARGE) Jarret Liotta for WestportNow.com

“There are forces changing communities,” he said. “It’s not that you’re doing anything wrong, (but) I’m not sure you’re getting that changes are underway … whether it’s climate change, demographics or the way young people want to live.”

“Your challenge is not the Norwalk mall,” he said, referring to the hugh shopping complex at I-95’s exit 15 set to debut in the fall, but maintaining — and in some cases restoring — the character of what makes Westport unique by augmenting opportunities for a more diverse and therefore “funky” community.

“You really want to encourage younger people to come and live here … You’ve got to grow your population a bit of younger people,” McGee said.

Kooris put more blame on the zoning of the town, saying that while it has proven to be a useful “control” tool, “we haven’t married that with flexibility.”

He said flexibility is necessary to encourage more diverse use of buildings downtown, particular multistory buildings that could potentially house apartments.

“This is by far the most fundamental tool,” he said, to fostering change and telegraphing a message to the private sector that the town invites development of downtown.

Planning and Zoning Commission Vice Chair Danielle Dobin, who was there along with at least two other commissioners, responded by listing a range of initiatives already underway in town, including affordable housing projects and public-private development partnerships.

“There has been a lot of change in Westport over the last several years,” she said.

Herbertson, too, defended aspects of the downtown, in particular several events designed to attract visitors including the Maker Faire and the annual summer art festival.

He said that while there are economic factors creating challenges to downtowns throughout the world, a focus on providing a personal connection — as well as an experience — potentially allow local merchants a chance to thrive.

“This is not to say that smart and adaptive planning — and more of it — is not required,” he said.

Local developer David Waldman, who is currently developing the former site of Save the Children on Wilton Road, shared a quantity of his frustration with the bureaucracy he said he faced in bringing his Bedford Square project to life.

“They make it very difficult some times,” he said, noting the process is “mired down by so many different layers of bulls**t we have to put up with.”

Several people also raised the question of whether rents were simply too high downtown, prohibiting small businesses from opportunity, and put some blame on landlords.

“I don’t think we’re here to blame Westport,” McGee said. “There’s change occurring (and) I believe Westport has the resources to adapt to change.”