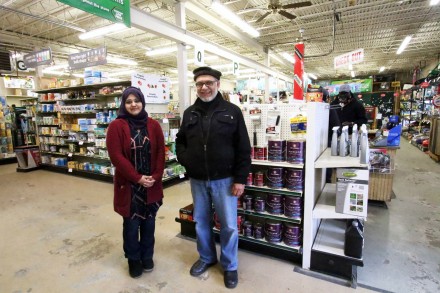 After 73 years, Torno Hardware, 800 Post Road East, will close within four months, according to store manager Sajjad Gul, an employee since 1999. It will be converted to a showroom for window and door products under its new owner Greenwich-based Interstate Lumber. Gul said he will continue to work under the new owners in its lumber yard. Gul’s wife, Ghazala, employed at Torno since 2006, said, “Since we emigrated from Pakistan this is the first and only job I’ve ever had.” Sajjad added: “I met Torno owner Bob Kelly in the late 1990s when he was a teacher at the University of Bridgeport and I was pursuing my MBA in finance.” (CLICK TO ENLARGE) Dave Matlow for WestportNow.com