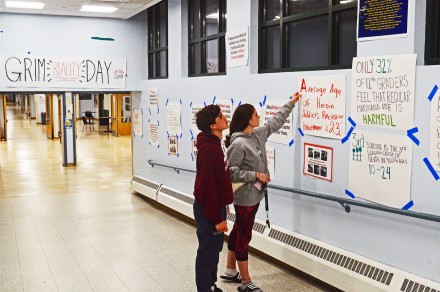 Members of TAG—the Teen Awareness Group—at Staples High School stay late today to put up posters for Tuesday morning’s Grim Reality Day. Formerly Grim Reaper Day, the club decided this year to make the event a little less maudlin, but still try to send a message. This year, instead of having a wrecked automobile in front of the school, and having 30 students dress up as drunk driving fatalities in succession throughout the day, in the morning students will instead be greeted by 30 students just standing mute outside in the front of the building to symbolize those victims. (CLICK TO ENLARGE) Jarret Liotta for WestportNow.com

State health data released today showed that among Westport’s five elementary schools in 2017-18, Greens Farms had the highest kindergarten vaccination rate against measles while Saugatuck had the lowest.

Data was also released on immunizations against polio, varicella, and hepatitis and showed relatively high numbers of students receiving religious or medical exemptions from vaccines.

They may not have found all the answers to curing — or even curbing — microaggressions based on race, ethnicity, gender, sexual orientation or religion, but tonight a group of residents and town officials strived to talk openly about the questions. 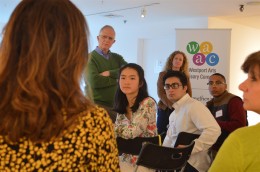 The term “microsaggressions” is described by Wikipedia as being used “for brief and commonplace daily verbal, behavioral, or environmental indignities, whether intentional or unintentional, that communicate hostile, derogatory, or negative prejudicial slights and insults toward any group.”

The discussion, moderated by Elaine Daignault, director of the Department of Human Services, and former Staples High School (SHS) principal John Dodig, used essays from the recent TEAM Westport Teen Diversity Essay Contest to spark discussion of how we all — regardless of our personal identifiers — commit these thoughtless acts, and what can be done about it.

Sandra Krenzer, co-president of the Long Lots School PTA, tells the Board of Education, “The community is exhausted.” (CLICK TO ENLARGE) Jarret Liotta for WestportNow.com

Some PTA representatives and parents urged the board to keep the focus on restoring what was.

Other issues, including the search for a new Superintendent of Schools, Staples High School principal, and investigating reported discontent among other school administrators, were also cited as things for the BOE to deal with before embarking on new items, related or not.

The JE Consulting firm, hired by the Westport Board of Education to find a new Staples High School principal to replace James D’Amico, has published a help wanted notice.

James D’Amico: successor must be “visionary.”Dave Matlow for WestportNow.com

Seeking a “strong visionary leader,” the firm said defining attributes of this individual must include:

“The ability to oversee and enhance teaching and learning in a 9-12 school of national distinction;

“The daily practice and demonstration of high moral and ethical character traits which will enhance secondary school culture and climate for student success;

In an email to parents, Buono said the district has hired JE Consulting to conduct a search for the replacement of James D’Amico, who announced his departure on March 8.

D’Amico, who took over the Staples job on July 1, 2016, said he has accepted the position of principal of his hometown high school, New Fairfield High School, commencing July 1.

“The position will be officially posted next week,” Buono said.

With Board of Education (BOE) approval tonight of a separation agreement for Superintendent of Schools Colleen Palmer, attention turned to finding a permanent replacement. 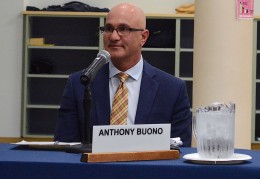 Anthony Buono at tonight’s meeting where he was named acting superintendent. (CLICK TO ENLARGE) Jarret Liotta for WestportNow.com

“Given the timing, I anticipate that we will probably look for an interim superintendent next year while the search for a superintendent is underway,” BOE Chairman Mark Mathias said in advance of tonight’s meeting.

“We do have some names of people that have been recommended to us for an interim,” he said, but those will not be made public.

Without discussion or public comment, the Westport Board of Education (BOE) tonight approved a separation agreement for Schools Superintendent Colleen Palmer and named Anthony Buono, currently assistant superintendent, acting superintendent until an interim superintendent is appointed. 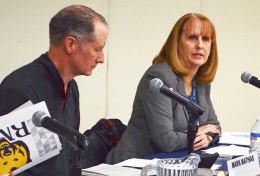 Board of Education Chair Mark Mathias and Schools Superintendent Colleen Palmer at the March 18 board meeting. (CLICK TO ENLARGE) Jarret Liotta for WestportNow.com

No details of the agreement were disclosed. The board had discussed the agreement in an earlier executive session. “For the remainder of her employment with the board, Dr. Palmer will be on leave for medical reasons,” said BOE Chair Mark Mathias.

“On behalf of the board, we want to thank Dr. Palmer for her dedicated service to the Westport public schools over the past three years,” said Mathias. 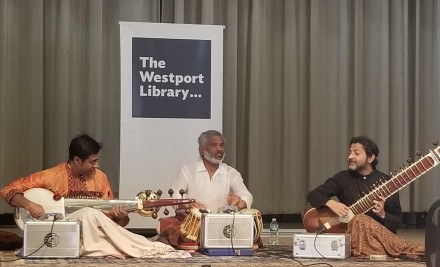 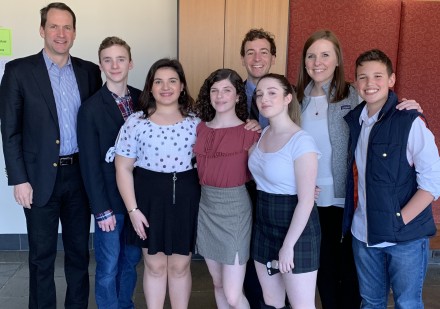