With a jab at the president’s views on immigration, Gov. Dannel P. Malloy today signed legislation that opens limited financial aid at public colleges in Connecticut to the undocumented “dreamers,” saying the new law was good policy and its bipartisan passage was positive politics.

“I think that this is an important day,” said Malloy, surrounded by students and advocates. “It is perhaps even more important in a society that has taken a turn for the worse, I think, when it comes to individuals who are in our country and our president’s comments have sought to demonize.”

The bill passed the House, 91-59, and the Senate, 30-5. The House vote Wednesday came a day after a federal judge dealt a setback to efforts by the administration of President Donald Trump to roll back limited protections for undocumented immigrants under the Deferred Action for Childhood Arrivals, or DACA, program.

DACA was created by the Obama administration on the premise that children illegally brought to the U.S., many of whom have known no other home, should be treated as low priorities for deportation while they seek legal status. About 700,000 persons have signed up for the program.

Staples High School seniors Samantha Atlas and Jack Whitten have been awarded the Joyce and Bernie Zimmerman Foundation Music Scholarship. The presentations were made at the Staples Symphonic Band and Orchestra concert. The scholarship is a special gift from the Zimmerman Foundation awarded to one male and one female in the graduating class who plan to major in music. (CLICK TO ENLARGE) Contributed photo

The 4 to 3 vote (Caney, Gordon, and Hartwell opposed) came after talk of the teachers union “ holding the town hostage” by failing to agree with six other educational unions to move to the state health plan. The move could save the town more than $1 million.

“We are not hostage takers,” Horrigan told the board. He had said that if the town agreed to an additional $140,000 expense in funding the teachers’ health plan, the union would agree to join the state plan. 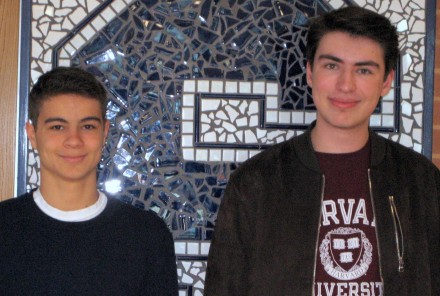 Staples High School today named Jackson Delgado (l) and Nick Attkiss class of 2018 valedictorian and salutatorian, respectively. Jackson will speak at the graduation ceremony on June 22. The night before, Nick addresses the senior class, parents and guests at baccalaureate.
Both have gone through the Westport school system from elementary school on, and both will enter Harvard University in the fall. (CLICK TO ENLARGE) Contributed photo 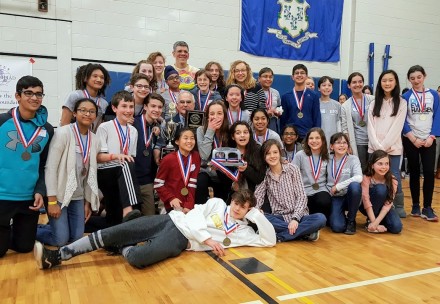 The Westport Public Schools today announced the appointment of Anthony Buono as an assistant superintendent of schools effective July 1.

Buono, who holds a Ph.D. in adult learning theory from Lesley University in Cambridge, Massachusetts, comes from the Branford school system where he has served as the assistant superintendent since 2015.

“Dr. Buono is an exemplary educational leader who thrives on cultivating leadership skills in those he works with and empowering teachers to boldly contribute to the mission of the work,” an announcement said.

“In his new role in Westport, he will oversee the PreK-12 academic program and serve as an integral part of the executive leadership team of the District.  His commitment to excellence and his dedication to every student’s success are hallmarks of his approach to his work.”

After more than four hours of strained discussions, Westport’s Board of Education tonight voted 5 to 2 to ask for a $1.5 million restoration from the Board of Finance when it meets Wednesday.

“This was the deepest cut I’ve ever seen,” said Superintendent Coleen Palmer, citing her 15 years as superintendent in other districts, as well as Westport.

Palmer had said that the schools could achieve a $1.3 million savings if the school unions partnered with the state health plan. But that estimate has since been lowered to $1,078,000, the board was told.

Last year at this time those of us trying to restore the school budget from cuts had over 1,000 signatures on their petition. By the end of the successful campaign we had over 2,300 names.

The community helped to secure a successful, but rare, super majority vote at the RTM. The margin was two votes. Our arguments included having a new superintendent, keeping head count flat, and a modest 2 percent increase in the cost per student. RTM Education and Finance Committees unanimously recommended restoration.

A year later — I stood up in the Board of Finance this week, and supported the motion to reduce the 2018/19 schools budget by $2,050,000. It passed. The Board Of Education (BOE) will be discussing its next steps on Monday. Will they ask for a restoration?

This year I will not be supporting any restoration request. Others might. 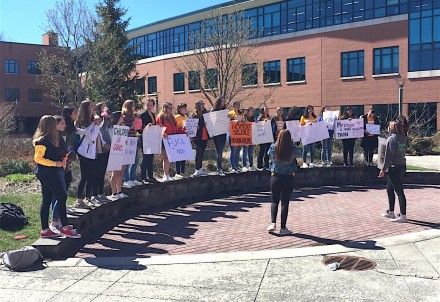 Staples HIgh School students gathered in a school coutyard today to take part in a nationwide school walkout to commemorate the 19th anniversay of the Columbine High School shooting. The April 20, 1999 shooting killed 13 students and staff, along with the two student gunmen. The Westport students were later scheduled to hold a rally on Veterans Green.  (CLICK TO ENLARGE) Margot Liotta for WestportNow.com

The Westport Board of Finance tonight voted for a $2,050,000 cut in the Board of Education budget and approved a total school and municipal budget of $207,703,868, representing a 1.3 percent increase over the current year.

The Board of Education will have an opportunity to return next week to seek any restoration in the cut, which was approved 6-1 (Lee Caney opposed). It then moves next month to the Representative Town Meeting (RTM), the town’s 36-member legislative body.

The Board of Finance action followed word from Superintendent of Schools Colleen Palmer that cost savings of $1.3 million to $1.5 million would be achieved by the school bargaining units joining the state health plan.