State legislative leaders declared today they had crafted the framework of a bipartisan deal to end Connecticut’s 110-day budget impasse, while conceding some key details, including distribution of town aid, remained to be resolved.

Gov. Dannel P. Malloy, who was not a party to the talks, expressed skepticism that the talks had produced a deal that would survive close scrutiny of rank-and-file lawmakers or his administration.

Anticipating the skepticism by Malloy and others in light of the dearth of details released by the lawmakers, Senate Republican leader Len Fasano of North Haven said the story of the day was how far the bipartisan talks had come, not what work remains.

State legislative leaders say they need a tentative, bipartisan deal by midafternoon Wednesday to keep alive their hopes of adopting a new state budget next week.

And if there is a bipartisan deal, it won’t include a hotly contested GOP proposal to cut state employee pension benefits in 2027 and reap big savings now.

Leaders were cautious not to predict success or failure, but lawmakers from both parties said that, while some key issues remain to be resolved, much progress has been made.

“I think the last week has been the most productive in this building that we’ve had all year long,” said House Minority Leader Themis Klarides, R-Derby. “And the conclusion will be the conclusion. I think we all have hope that we can come to an agreement on something that’s best for the state.” 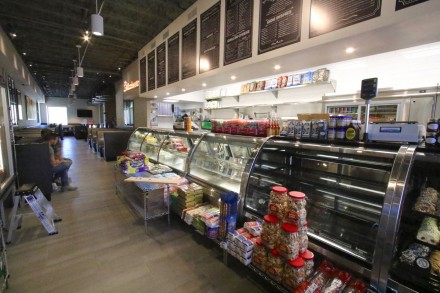 The new Rye Ridge Deli is almost ready for opening next week at 159 Main St., former site of iconic Oscar’s Deli. It is one of the most anticipated Main Street openings in years. Manager Mike Ventorino said “the town (regulatory) departments have been very responsive and cooperative during the approval process. Just a few more steps to go and we’ll be open by Monday.” He added, “We’re having some family members come by this weekend and, starting Monday, we’re going to open sort of quietly to make sure everything works well.”  Ventorino said there will be seating for 90 plus 24 seats on the sidewalk patio when weather permits. Hours will be 7 a.m. to 9 p.m. every day. (CLICK TO ENLARGE) Dave Matlow for WestportNow.com 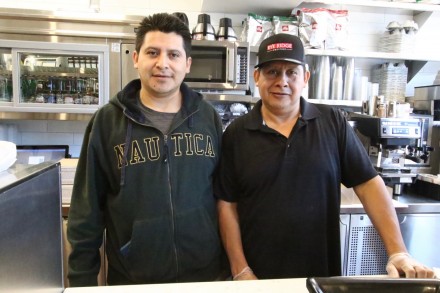 When the new Rye Ridge Deli opens Monday at 159 Main St. customers will see a couple of familiar faces. Cris (l) and Joaquin Dolores worked behind the counter at Oscar’s Deli, which formerly occupied the space, for 11 years. Both have been training with the new staff. The restaurant features a full kitchen in the basement and serves up traditional deli fare and other dishes.  (CLICK TO ENLARGE) Dave Matlow for WestportNow.com 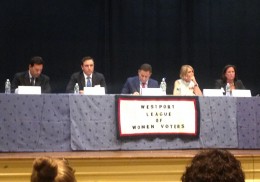 The P&Z Town Hall auditorium debate sponsored by the Westport League of Women Voters (WLWV) capped tonight’s two earlier presentations for four unopposed Board of Education members seeking reelection and three candidates for the Zoning Board of Appeals.

The P&Z debate was also the most heated as Democrats Danielle Dobin, Michael Cammeyer and Greg Rutstein squared off against Republican John Olefson and Jennifer Johnson, a third party candidate endorsed by the Coalition for Westport. Save WestportNow has also endorsed the three Democrats.

Johnson threw down the gauntlet at the start, calling the town Plan of Conservation and Development (POCD) recently approved by the P&Z “a grave disappointment” that had little public input and for which she had to employ the Freedom of Information ACT (FOIA) to review a copy of a draft.

Text and map amendments designed to implement the Elm Street land swap between the town and local developer David Waldman are scheduled to be heard at the Planning and Zoning Commission (P&Z) meeting Thursday at 7 p.m. at Town Hall, it was announced today.

Simultaneously, the P&Z is set to review a map amendment rezoning property adjacent to the Kemper-Gunn House at 35 Elm St., the town’s exchange parcel, and 36 Elm St. to the BCRR designation, Young added.

She said that if the applications are approved, the next step in the approval process will require a site plan for development of the “exchange parcel” and 36 Elm St.

Wall Street today issued its loudest warning to date that Connecticut’s budget impasse will threaten credit to nearly one-third of all cities and towns.

Moody’s Investors Service announced measures that could lead to lower bond ratings — and higher interest costs — for 51 municipalities and six regional school districts, affecting nearly $7 billion in outstanding debt. [Westport was not among them.]

At the same time Moody’s also assigned negative outlooks — often a precursor to a bond-rating downgrade — to an additional 25 municipalities and three more regional school districts that collectively have another $3.45 billion in outstanding debt. 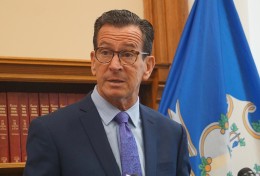 The governor’s new plan would reduce spending by an additional $144 million, over this fiscal year and next combined, compared to a budget endorsed by Malloy and Democratic legislative leaders that fell short of passage when a three Democrats in the Senate and five in the House balked and voted for a GOP version.

Malloy’s revisions to the September plan maintain emergency relief for distressed municipalities by including a revised formula for redistributing education aid. It still shifts funding from wealthy communities to poorer ones, but not to the degree originally sought by the governor.

“This is a lean, no-frills, no-nonsense budget,” Malloy said. “Our goals were simple in putting this plan together: eliminate unpopular tax increases, incorporate ideas from both parties, and shrink the budget and its accompanying legislation down to their essential parts. It is my sincere hope this document will aid the General Assembly in passing a budget that I can sign into law.”

Gov. Dannel P. Malloy warned legislators today that he would veto any state budget — even one enacted with bipartisan support — if it is riddled with the same gimmicks he rejected two weeks ago.

“I think that people would be making a mistake if they totally ignored my veto message,” Malloy told reporters. “But on the other hand, a veto can be overridden, and I’m well aware of that. But I can assure you that threat won’t cause me to change my values or the like.”

Malloy also expressed doubt that legislative leaders were close to a bipartisan deal, even though House Speaker Joe Aresimowicz, D-Berlin, expressed optimism Tuesday at a news conference with Republican and Senate Democratic leaders. The governor smiled and said the body language didn’t signal agreement to him.

Aresimowicz indicated that any bipartisan deal probably would include several Republican proposals that the governor and his fellow Democrats in the legislature decried just a few weeks ago. 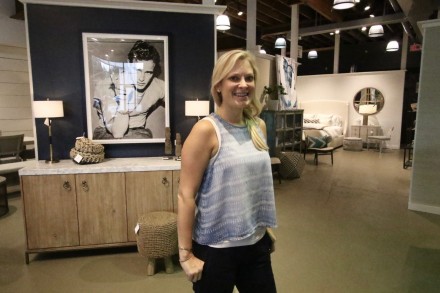 Tusk Home Design has opened at 1375 Post Road East, next door to the prior location of Anthropologie. According to owner Sarah Weiland (above), she is has been a member of the American Society of Interior Design (ASID) for more than eight years. She said the Tusk staff, including four interior designers, specializes in renovation and new construction and features “vintage and one of a kind transitional furnishings and accessories.” The 4,000-square foot space was formerly occupied by Parc Monceau, a French antique design business, that operated in Westport for 32 years under three ownerships. Tracy Dwyer, the final owner of Parc Monceau, is one of Tusk’s designers. (CLICK TO ENLARGE) Dave Matlow for WestportNow.com