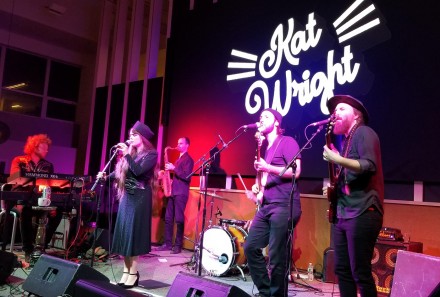 Kat Wright and her sevenpiece band played to packed crowd in the new forum at the Westport Library tonight as part of the sixth emulation of the Westport Chamber of Commerce Supper & Soul, Dowtown Dinner and Concert Series (CLICK TO ENLARGE) Contributed photo

Scenes from tonight’s opening of the Staples Players production of “Mamma Mia! Performances are this weekend and next. Lynn U. Miller for WestportNow.com 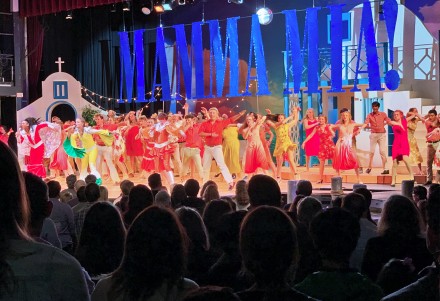 The opening night audience tonight gave a standing ovation to the Staples Players production of “Mamma Mia!” Performances continue this weekend and next. (CLICK TO ENLARGE) WestportNow.com photo 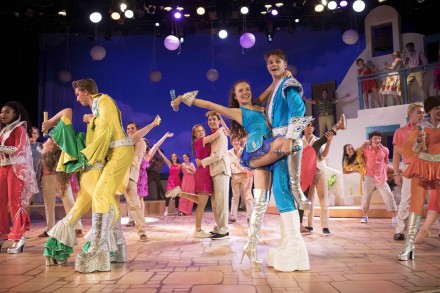 Staples Players presents ‘Mamma Mia! ‘opening tonight with performances this weekend and next. David Roth (SHS ’84) and Kerry Long (SHS ’97) co-direct the
cast of 63. The musical was written by British playwright Catherine Johnson, based on the songs of ABBA composed by Benny Andersson and Björn Ulvaeus, former members of the band. The title of the musical is taken from the group’s 1975 chart-topper “Mamma Mia.”  Its Broadway incarnation closed in September 2015 after a 14-year run, making it the ninth longest-running show in Broadway history. Pictured rehearsing the finale (l-r): Camille Foisie (SHS ‘21), Tobey Patton (SHS ‘20), Erin Lynch (SHS ‘20), and Jamie Mann (SHS ‘21). Visit http://www.staplesplayers.com.for ticket information. (CLICK TO ENLARGE) Kerry Long photo 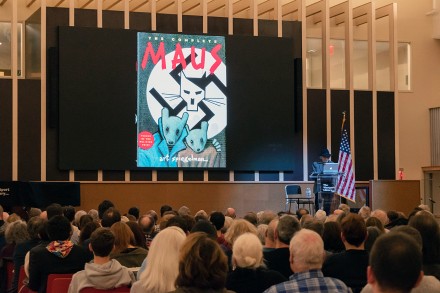 It was a packed house at the Westport Library tonight for the 2019 Malloy Lecture in the Arts featuring cartoonist, editor, and comics advocate Art Spiegelman. His comics are best known for their shifting graphic styles, their formal complexity, and controversial content. In 1992, Spiegelman won the Pulitzer Prize for his masterful Holocaust narrative “Maus”— which portrayed Jews as mice and Nazis as cats. “Maus II” continued the remarkable story of his parents’ survival of the Nazi regime and their lives later in America. This is the first year since the lecture series began in 2002 that it has been held at the Library. The Malloy Lecture in the Arts series is made possible by a generous contribution from the late Westport artist Susan Malloy. (CLICK TO ENLARGE) Contributed photo

Historians cite the Battle of Midway as the most effective naval warfare operation, debilitating the Imperial Japanese Navy just six months after the 1941 attack on Pearl Harbor left the U.S. fleet in ruins.

There’s Lt. Col. James Doolittle’s (Aaron Eckart) daring airstrike on Tokyo weeks later, followed by his crash-landing in Japanese-occupied Chinese territory and rescue by Chiang Kai-shek’s loyal rebels. But the Americans were unsure where to go next. 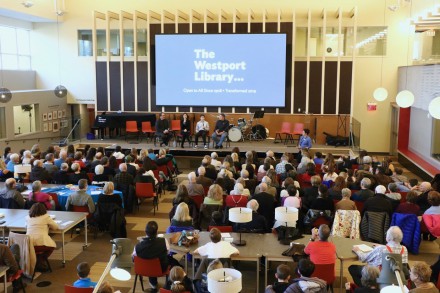 An overflow crowd today attended the Westport Library screening of HBO’s Emmy-winning, family-friendly short film, “The Number On Great-Grandpa’s Arm.” It was followed by a discussion, moderated by the Rev. John D. Betit of Christ & Holy Trinity Church, with Elliott Saiontz, the film’s young narrator, his mother Stacey Saiontz and Jeff Scher, animator and local resident. Following the panel discussion a musical production emulated the spirit of the event led by Nu Haven Kapelye, a Klezmer orchestra made up of musicians from many faiths and walks of life. (CLICK TO ENLARGE) Dave Matlow for WestportNow.com 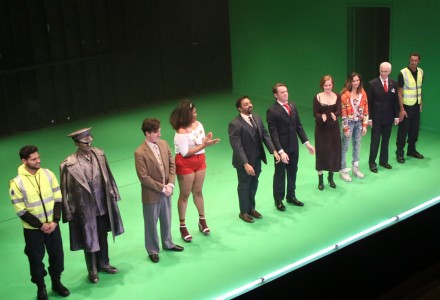 She will be in conversation with thriller writer Wendy Walker Sunday, Dec. 8 at noon. The afternoon will focus on the release of Shepard’s new book “Reputation.”

“In Reputation,” the women of a tight-knit college town learn through gossip, scandal, betrayal, and even murder, who their neighbors and husbands really are.

Shepard is the author of a number of best-sellers including “The Lying Game,” “The Heiresses,” “The Elizas” and “The Perfectionists.” 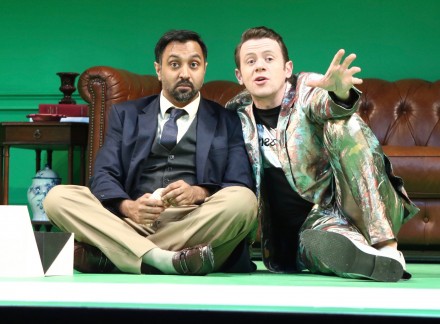 The world premiere translation and adaption of Molière’s comedy, “Don Juan,” by Brendan Pelsue and directed by Westport Country Playhouse associate artistic director David Kennedy, previews at the Playhouse tonight through Friday and opens Saturday and runs through Saturday, Nov.  23. The play casts the legendary Don Juan in this modern-dress production of the satirical, classic comic tale. Pictured:  Bhavesh Patel (l) in the role of Sganarelle, Don Juan’s sidekick, and Nick Westrate in the title role. (CLICK TO ENLARGE) Dave Matlow for WestportNow.com