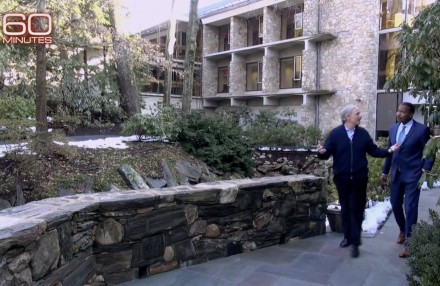 Security is tight and outside cameras are rarely permitted inside the Westport headquarters of Ray Dalio’s Bridgewater Associates, by some accounts the world’s largest hedge fund and Westport’s largest private employer. But CBS’s “60 Minutes” was permitted inside the former Glendenning property on the Aspetuck River near the Weston line as it broadcast a Bill Whitaker interview tonight with Dalio. Westport was never mentioned as the location of the office, only that it was located in the Connecticut countryside. The wide ranging interview covered everything from Dalio’s national emergency fear of a coming conflict between the nation’s haves and have nots to his fascination with exploring the world’s oceans and his just announced $100 million Dalio Foundation education initiative with the state of Connecticut, See full interview HERE. (CLICK TO ENLARGE) Photo from “60 Minutes”