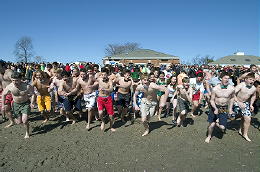 With the air and water temperature in the mid-30s, 230 participants ranging in age from 8 to 80 plunged into Long Island Sound in the event hosted by the Southwest Region of Special Olympics Connecticut.

Special awards were presented to plunge participants. The Emperor Club Award for the group or organization raising the most money went to Northwestern Mutual Financial Network for its sponsorship contribution of $7,500, plus $9,000 raised by employees.

The Arctic Hero Award for the public safety department which raised the largest amount of money went to the Westport Police Department for raising more than $2,700, organizers said.

The Rockin Schoolhouse Award for the school team or club which raises the most money went to New Canaan High School for raising more than $7,000;

The Silver Penguin Award for the oldest participant went to David Lindsey from Bridgeport. David is 77 years old.

The Rock Hopper Penguin Award for the most creatively dressed Penguin went to James Lyons of Shelton, dressed in a grass skirt.