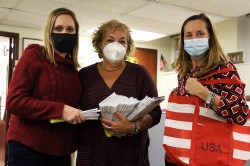 While national results were still up in the air Tuesday night, Westport went with Joseph Biden for president with 12,775, while giving Donald Trump 4,184.

State Sen. Will Haskell won reelection to his 26th District seat, getting 10,230 votes in Westport as compared to his GOP challenger Kim Healy’s 4,721.

One of the major stories of the day was the large number of absentee ballots that were returned to Town Hall—a direct result of the pandemic.

“Over 9,400 ballots (were) counted,” said Town Clerk Patty Strauss, who said approximately 93 percent of the 10,183 ballots issued were returned.

“It’s huge for us to have that large of a turnout,” she said, with more than 17,500 of Westport’s 19,970 registered voters casting ballots—a record-breaking turnout of more than 85 percent.

“Obviously this is a very important election … and people are voting because they feel their voting is important,” Strauss said.

“I don’t know how people are voting, but it certainly has energized them,” she said.

Strauss noted that while typically eight to 10 percent of the town’s electorate vote by mail, this year it was close to 50 percent.

She noted that last year the number was only around 65, but noted it was an off election year with only local races.

She said, however, that the town’s registrar of voters were predicting the turnout for same-day voting would be anywhere from 300 to even 1,000.

“I had a feeling it was not going to be that high,” she said.