Called the most powerful woman at the United Nations—and a possible future U.N. Secretary General—former New Zealand Prime Minister Helen Clark today stood in stark contrast to the images of powerless Afghan women and children on display at the Westport Arts Center (WAC). 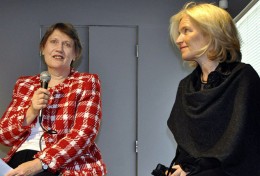 Speaking before a packed WAC audience, Clark’s eyes studied the photos, images of women in burkas or giving birth, huddled together for strength or alone, their faces mutilated, and young girls old before their time, their eyes joyless.

The photos arrayed in the exhibit “On the Wire: Veiled Rebellion,” are the work of Westporter Lynsey Addario, a Pulitizer Prize-winning photojournalist who is no stranger to dangerous places.

Clark shared her knowledge and experience with Afghanistan, “a landlocked place on the way to somewhere,” from a pass through for New Zealanders making their way on the bus to Europe to a post 9/11 war zone to the U.N.‘s current efforts and “elements of hope.”

Prior to its king being deposed in 1978, Afghanistan was country where women were free, Clark noted.

“They walked around in miniskirts,” she said.

But after the Taliban came to power, “even the Iranian ambassador called it traumatic,” she said. 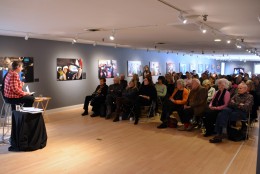 For Clark, the turmoil of Afghanistan, a continent away, literally arrived on her shores in August 2001, just weeks before the 9/11 attacks here, she said.

More than 400 boat refugees fleeing the Taliban’s repressive regime nearly drowned, and after being rescued by Norwegian ship, sought asylum in Australia. The problem was that Australia had been overrun by asylum seekers, Clark said.

“I said these people can’t sit on the boat forever,” she recalled about her decision to grant them asylum in New Zealand

Of the refugees, 39 were teenage boys sent on by their parents.

“You have to ask yourself what drives a family to send their underage children,” she said.

The refugees were processed, settled into housing and the children were enrolled in schools. Each year these Afghan settlers celebrate a reunion, she said.

“I have to say that this was one of the most successful refugee asylum seekings we ever had,” Clark recalled.

Clark said that in 2003 she visited Afghanistan, noticing that much of its centuries-old architecture and culture had been destroyed by the Taliban, such as statues of Buddha that were gone.

Weston resident Robin Austin asked if young Afghan women might rally, as seen in other countries, such as Egypt, to affect change.

“Do you see the role of young women bringing about change?” he asked.

“Along with the horror stories, you also see element of hope,” she said.