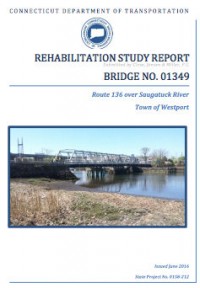 The long-awaited report will be discussed at a Town Hall meeting on Wednesday, June 15 at 7 p.m. (CLICK TO ENLARGE) CDOT graphic

The reason is that cost projections seems to favor rehabilitation over replacing the historic swing bridge listed on the National Register of Historic Places.

Shortly after the report was posted, the Westport Preservation Alliance announced, “The town has been heard.”

“DOT is going back to the drawing board and calls for more public input,” the group stated in an email, citing the report’s cost analysis that it would take $19.8 million to rehabilitate the bridge compared to $38.8 million to replace it.

Still, the alliance took issue with the fact that the restoration aims to raise clearance on the bridge to accommodate large trucks.

Town officials have stated that they did not want large trucks using the bridge as a shortcut through Saugatuck and Greens Farms neighborhoods.

Built in 1884 and reconstructed in 1993, the bridge is a continuous steel, multi-girder swing span and fixed span bridge that carries one lane of Route 136 traffic in each direction over the Saugatuck River in Westport, the report says.

“The project was initiated due to the deteriorated condition of the Pier 2 piles and cross bracing, and extensive vehicular impact damage to the trusses as a result of deficient travel way geometry, which includes a substandard curb-to-curb width of 19 ft. – 6 in. compared to the 28 ft. functional standard,” the reports says.

According to the CDOT, the bridge has an average daily traffic of 13,100 vehicles.

CDOT officials have scheduled a public information-input meeting on the project for Wednesday, June 15, at 7 p.m. in the Town Hall auditorium. Copies of the RSR will be available at the meeting.

“I encourage interested parties to review the report online and to attend the information session on June 15,” said First Selectman Jim Marpe.