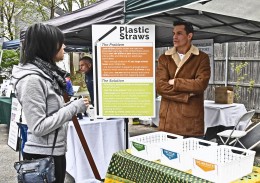 The vote makes Westport the first municipality on the east coast to have such a comprehensive ban, according to RTM member Andrew Colabella, the ordinance’s sponsor.

Seattle has a similar ban, while on the east coast Maine last week banned expanded polystyrene, he said.

Town officials and members of the public who spoke in favor of the ordinance said it was an extension of Westport in 2008 being the first in the country east of the Mississippi to ban single-use, plastic bags.

“Once again, we are leading by example,” said Colabella about the prohibition that gives merchants six months to comply

He also tugged at emotions of those present, showing videos of children, who would inherit the planet, speaking in favor the ban. A couple of students spoke as well.

Colabella said the ordinance provides an American with Disabilities Act (ADA) exemption for handicapped individuals who need plastic straws. It also allows plastic utensils, he said, because there are not yet any “viable cost alternatives.” Wood poses the possibility of splinters, he said.

“Let’s make this happen tonight,” Colabella said. “The Earth doesn’t need us. We need the Earth.”

Prior to the vote, Stamford resident Jack Egan, chairman of the Connecticut chapter of Surf Rider Foundation, urged the passage of the ordinance, choreographing the threats discarded plastics pose to marine life in the Long Island Sound.

He said that last year volunteers removed 8,250 pounds of plastic from the Connecticut shoreline.

The ban also had strong support from environmental organizations such as Save Westport Now and Earthplace: the Nature Discovery Center. First Selectman Jim Marpe and Alicia Mozian, the town’s conservation director, also lauded the proposal.

“It reflects the values of Westport: responsible stewardship for the environment and leading the way for other communities in practicing what we preach,” said Marpe.

He added that the ban was compatible with Westport’s goal of Net Zero by 2050.

Mozian said enforcement would be “reactive, not proactive” based upon reports to her office. She said that what helped with the plastic bag ban was having businesses buy into it.

Colabella said he already had a number of food service businesses on board.

Jeffrey Wieser, RTM deputy moderator, recalled what it was like when Westport initiated its plastic bag ban more than a decade ago, “and the world has not ended.”

He said that just recently, a number of other towns have followed suit seeing how well the ban has worked in Westport, while keeping 40 million plastic bags out of the waste stream.

“I have a feeling in 10 years, they’ll be saying, ‘Single use plastic, that’s something we should have done 10 years ago,’” Wieser said.

He, like a number of other RTM members prior to the vote, praised Colabella for his initiative. RTM member Kristan Hamlin even penned a poem to him, which she read at the podium.