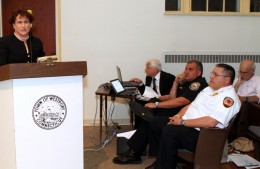 The study had been urged by the Board of Education and Schools Superintendent Elliot Landon in response to the Newtown school shootings that killed 26 at Sandy Hook Elementary School in December.

“I don’t know if this audit will do anything positive,” said Gil Nathan, one of the dissenters. “I am not in favor of it because it has to do with the process. And I don’t want to see the contract signed tomorrow morning.

Elaine Whitney, school board chairwoman, said that the board hoped to have the Kroll contract signed Friday and the audit would be conducted over the summer and into September.

“Do you think that we need the study?” asked Don Bergmann, another dissenter. “I don’t think we do.”

Bergmann said such an audit would not be a guarantee against another Sandy Hook.

RTM member Louis Mall made an impassioned plea for the legislative body to approve the funding requests, which had already approved by the Board of Finance, saying, “I’m going to vote on it for our kids.”

“They’re (Kroll) going to tell us where we are vulnerable,” said Mall.

Noting that his father had been a schools superintendent, Mall credited Landon for being responsible for other people’s children and pushing the security audit.

“We’re talking about $17 per kid,” Mall noted about the study’s overall cost. “We didn’t have this much discussion over $1.7 million for the Levitt Pavilion.”

RTM member Matthew Mandell seemed to grill Whitney with a number of questions, among them being what the school board would do if Kroll suggested armed guards on campus.

“I don’t want to see a recommendation in that study to put guns in school,” Mandell said.

Assistant Police Chief Foti Koskinas reponded that the position of the Westport’s Town/School Security Task Force was not to have an armed presence on campuses.

In fact, he said that when the task force reviewed the three finalists out of the 12 respondents to the RFP (request for proposals), that question had been raised, and the task force stressed there were be no armed campuses.

Mandell also questioned whether the study would be necessary since the state would have a similar one. Landon responded, saying that Kroll’s expertise will make what the state does “less inclusive than what we do.”

Mandell also raised a red flag, saying that the study was just the beginning and that Kroll’s recommendations could wind up costing the town “hundreds of thousands or millions” to implement its suggestions

RTM member Jack Klinge called the cost of the study “a down payment on a common sense, effective security plan.”