Though not within the Planning and Zoning Commission’s (P&Z) purview to approve or disapprove, the commission tonight gave unanimous sense-of-the-meeting support for designating a 1.2-mile stretch of Route 136—Compo Road South from Post Road East to Bridge Street and over the Bridge Street Bridge to Saugatuck—as a scenic road. 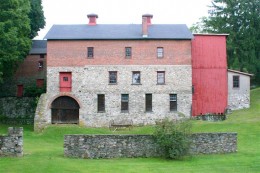 The Gault barn at 124 Compo Rod South was cited as one of the prominent stuctures on the requested scenic road designation. (CLICK TO ENLARGE) Dave Matlow for WestportNow.com

Along with their support, P&Z members agreed to give scenic road proponents a letter in support as they go before the Connecticut Department of Transportation (CDOT). The CDOT would have to issue the designation since 136 is a state road.

In making their presentation to the P&Z, the four acknowledged that they sought the scenic road status to bolster their efforts to preserve the 1884-built Bridge Street Bridge, formally known as the William F. Cribari Memorial Bridge. It is Connecticut’s oldest, surviving, moveable, hand-cranked swing bridge that is on the National Register of Historic Places.

The state is currently studying restoration plans for the bridge, which has fallen into disrepair. Many residents want the state’s renovation plans to respect the bridge’s historical significance to Westport.

Concerning scenic road designation, Boyd spoke about the route’s importance to the town’s colonial past since it was the road British troops marched along toward Danbury after they had landed at Compo Beach, meeting resistance from Minutemen along the way.

“It’s part of our Revolutionary past, our agricultural history and our maritime heritage,” Boyd said about the road of historic houses, including the Gault barn at 124 Compo Road South.

P&Z Vice Chairman David Lessing asked if there would be any downside the designation, such as “the state being less likely to do maintenance” because of red tape associated with scenic roads.

“Theoretically, it may work in our favor,” Garten responded to a similar question from commissioner Paul Lebowitz, hinting that the state might pay more attention to the road due to its scenic status.

One thought on “P&Z Throws Support Behind Scenic Road Bid”