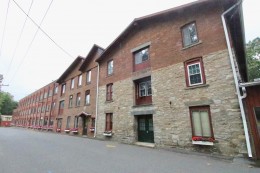 The Mill, 41 Richmondville Ave., was built in the 1880s. (CLICK TO ENLARGE) Dave Matlow for WestportNow.com

The Planning and Zoning Commission (P&Z) unanimously approved Thursday night developer 41 LLC’s text amendment and site plan for 32 two- and three-bedroom units, 7 or 20% of them affordable, at the 1880s-built riverfront building.

The original mill was where Lee’s Manufacturing made candle wicks, tinsel, ribbon and twine. It was powered by water from what would be named Lee’s Pond.

An agreement 41 LLC has with residents on neighboring Millbank Road, where the sewer line will be relocated from Richmondville Avenue, states that homeowners will get free sewer hookup and their road repaved.

According to Dobin, the 20% affordable units will be either on-site “or via an off-site, special needs housing development” at the P&Z’s option. The approval also includes one studio apartment for a live-in superintendent.

Text amendment 774 and the site plan had been submitted back in September by Rick Redniss, principal of Redniss & Mead, a Stamford-based civil engineering and land use consulting company.

The contract purchasers include developer Sam Gault and Joe Feinleib of Coastal Construction Group who was instrumental in the housing development at Geiger’s Nursery on Post Road East.

The move to condominiums is not the first transformation for the 55,000-square-foot structure. In the 1930s, it housed the Embalmer’s Supply, and in later years, Architectural Plastics and New England Engraving.

The late local sculptor Stanley Bleifeld worked there. Among its current tenants are University Archives and Homes with Hope.