Westport Planning and Zoning Commission (P&Z) Chairwoman Catherine Walsh said today that she would welcome representatives of electric car superstar Tesla to come back with an application for a dealership in Westport — but not at 20 Saugatuck Ave. 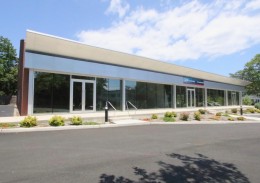 The property at 20 Saugatuck Ave. that was targeted by Tesla. (CLICK TO ENLARGE) Dave Matlow for WestportNow.com

“We want Tesla to come back, but it has to be a different spot,” Walsh said.

Her comments came on the heels of Melvin Barr, Tesla’s land use consultant, asking Planning and Zoning Director Mary Young on Friday to remove his proposed text amendment from Thursday’s P&Z agenda.

The amendment would have allowed electric automotive establishments or service centers in a restricted office-retail districts (RORD).

Though a text amendment and not site plan, Barr’s proposal was pretty site specific, 20 Saugatuck Ave., an empty, more than 7,000-square-foot building across from Dunville’s restaurant. The “electric automotive establishment” was pretty specific, too — Tesla.

At the P&Z’s June 15 meeting, commissioners heard myriad arguments against the dealership in the area from residents concerned about increased traffic on an already busy road. (See WestportNpw June 15, 2017)

All of the P&Z members also had a problem with the location. Without voting and leaving the matter open, members said the proposed amendment “betrayed the RORD,” was in opposition to the town Plan of Conservation and Development (POCD) and that a dealership would be better suited for a highway service zone on the Post Road.

“They saw the writing on the wall,” Walsh today about Tesla pulling the application set to be reheard Thursday night. “It was the wrong location for that use. It would have entailed a text amendment to RORD zones.

“There were other sites that it could be applied to, and that is how we look at things,” she added. “The neighbors came out, and we listened to them.” she added.

Barr was unavailable for comment as was the local Tesla representative.