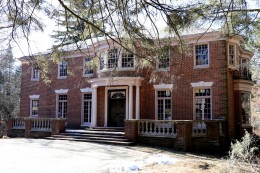 The P&Z briefly discussed “adaptive reuse” of the “Golden Shadows” mansion (above) and another house on the town-owned Baron’s South property. (CLICK TO ENLARGE) Dave Matlow for WestportNow.com

Charles Haberstroh, chairman of the Parks and Recreation Commission, questioned how the amendment might affect the town’s ability to add a new pool at Longshore, restore the park’s cabins, even renovate and expand the Inn at Longshore.

Selectwoman Helen Garten, currently leading a move to restore and reuse the abandoned Golden Shadows mansion at the 22-acre Baron’s South property, as well as another home on site, had concerns whether the text of the proposed amendment could hinder town plans in the works for the buildings’ adaptive reuse.

Currently, the Baron’s South property is the only property in a DOSRD 2 zone, and the P&Z plans to designate residentially zoned Longshore Club Park and Compo Beach as DOSRD 2, according to Planning & Zoning Director Laurence Bradley.

Baron’s South had been considered the site for senior housing complex, a plan that was shot down after seven years of planning in March when the P&Z declared the whole property open space.

The Westport Center for Senior Activities located on Baron’s South, however, catches a break under the proposed amendment since pre-existing, legal buildings in a DOSRD 2 zone would remain conforming and have “legalized use.”

As such, those structures via special permits can grow and expand up to 50 percent of the building’s footprint “in a manner consistent with the objective of DOSRD, “while limiting the introduction of new uses and controlling more intense development,” the amendment says.

But tonight’s concerns did not come from Senior Center or housing proponents.

“If we wanted to put in another pool at Longshore …is that permitted at all under this?” asked Haberstroh, adding that the same concern would extend to adding another platform tennis court.

Rebuilding or expanding the cabins would be another issue, he said. Walsh chimed in that it would not be a problem to rebuild “any structure in existence since 1990.”

“We’re in the process of doing a site plan for Longshore,” said Haberstroh. “We’re going to try to deal with that in a creative way.”

That would include revamping and possibly expanding the Inn at Longshore, he said.

Garten said that the historic renovation plans for the two Baron’s South structures would not involve expansion, but an adaptive reuse of the buildings either as a single-family residence, which they were, offices for a nonprofit organization, or for private professional use.

She added that the town recently issued an RFP (request for proposals) and recently held a Golden Shadows property walk through with 12 potential bidders, some of whom were architects excited by the building’s prospects. She said that the return date for the RFPs was Jan. 12.

P&Z Chairman Chip Stephens said he would support using the term “adaptive reuse” in the proposed amendment instead of citing specific uses.

“I’d salute ‘adaptive reuse’ instead of pigeonholing yourself into just the ones you said,” he told Garten. “I’ve heard other things like group senior housing, maybe even hospice or something like that.”

“This is not going to go through any time soon,” Stephens said about the amendment. “Share it with us when you get your RFPs.”

The amendment is scheduled to be reheard at the commission’s Feb. 4 meeting.

Westporter Don Bergmann stressed that the P&Z had to address other uses of Baron’s South, including the planned expansion of the Senior Center.

“You made up your mind and what you want to accomplish,” said Bergmann. “I just don’t think you have it here.”