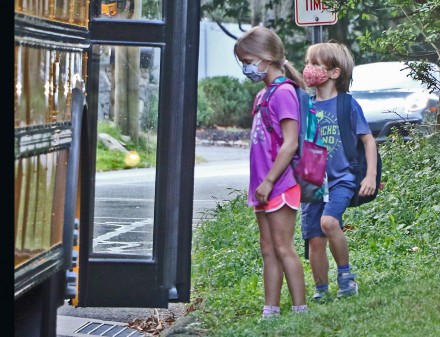 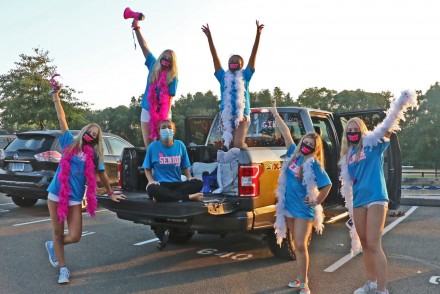 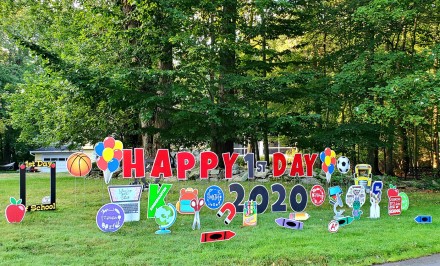 A highly creative lawn display on Colony Road greeted Staples and Bedford students on their way to their first day of school today.(CLICK TO ENLARGE) David Dreyfuss for WestportNow.com

Editor’s Note: WestportNow rarely publishes letters to third parties, but makes an exception for this one from the Staples football captains to state representatives:

As the 2020 captains of the Staples High School football team, we are asking you to appeal directly to Governor Lamont for the reinstatement of 11 v 11 tackle football this fall.

We specifically request that Governor Lamont have the Department of Public Health and CIAC collaborate in the creation of a plan incorporating appropriate protocols that will permit live games safely this fall.

The decision to cancel high school football has already negatively impacted the close to 10,000 Connecticut students who have the privilege to play high school football. We ask that you consider the long-term emotional, mental and physical risks to these students if football is not played, especially in light of the State’s extremely low transmission rate.

Staples High School Football is of supreme importance to us and our teammates. We grew up in Westport attending games, waiting and working for the day that we would have our opportunity to represent Staples and the Westport community.

Currently, 36 other states have approved all fall sports including football. Why is CT different from these states?

What can we learn from these other states?

What metrics are necessary for us to safely play football?

What can we do to help?

How can we assist you to represent the Westport community in a positive light? As Town Representatives we thank you for everything you do for us and our community.

We humbly ask that you fight for your constituents and take a leadership role in supporting the safe participation of a game that truly means so much to us, our families and our community.

We ask to Let Us Play. 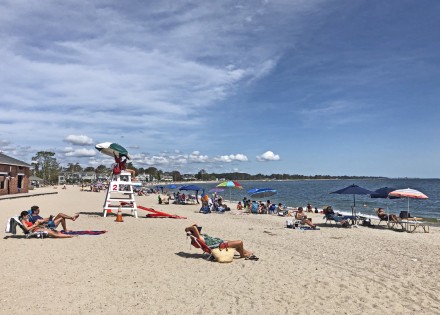 Social distancing was in order as Westporters headed to Compo Beach this Labor Day and the traditional end to summer. Beaches at nearby Sherwood Island State Park were crowded and parking lots shut down before noon. (CLICK TO ENLARGE) Anna-Liisa Nixon for WestportNow.com

I am most certain that you have received countless messages from teachers, principals and others in the school system as we approach the first day of school tomorrow. I will do my best to keep this brief so that you could enjoy the last day of summer vacation, along with this gorgeous weather.

Enclosed in this message are necessary notifications for parents and guardians in order to start the school year. Please review at your earliest convenience.

Most importantly, I would like to welcome each of you to the start of the 2020-2021 school year. This will be a unique year, and one that will require the abilities to communicate effectively, to adapt regularly, and to support each other as we navigate the realities of educating our students during a pandemic.

Success stories such as this one have been reported all over private industry and the nonprofit sector. Reinventing, i.e. transforming a process or recasting for a new use, is a bit more complex when considering teaching and learning. I am a purist in a sense in that I believe in the power of the interpersonal dynamic between the teacher and the student, live and in-person. Technology has augmented facets of education, yet it still has not, and some regards, I do not believe it ever will, replace the incalculable experience of the classroom.

Yet, for this school year, hundreds of Westport teachers and support staff are faced with this challenge.

Last Thursday I had the chance to formally address each and every employee of the Westport Public Schools, albeit, remotely. I shared my thoughts on how the highest performing systems, (i.e. teams, private industry, etc.) can “count” on each other for the greater good of the mission. I made specific promises of support to the team.

In my numerous conversations with teachers and support staff over the past few weeks, it is clear to me that within the midst of uncertainty and anxiety, there is a strong desire to do this right, to meet the needs of each and every student in a way never done before.

We are not, and will not be, perfect. We are a system comprised of people with all of the strengths, potential, and shortcomings that we bring collectively to our schools, present company included. However, like Dimo’s pizza, we are poised to rise up and reinvent, if only for this time period, while we continue to confront this pandemic. Our kids are counting on us.

Although I am not well-known to the community at this point, I am confident that you will all come to see me as an educational leader who is by nature, optimistic. I do not believe that optimism is the denial of current reality, but the belief that all things continually improve, that this too will get better.

Until that time, I ask that you join me in supporting our educators as they embark down a path of reinventing, even if for only this year, in order to meet the needs of our children. I ask that you offer your patience, your generosity, and your kindness.

In turn, on behalf of the Westport Public Schools team, I offer you the promise that we will do our very best to serve your child, to bench mark our progress and seek to continually improve, and to provide your child with not only an excellent education, but a nurturing place to grow and develop during this time.

As summer closes and we approach our first school day, I ask all in the school community, to rise up and join together to deliver for our children.

(Go to WPS website for back to school information)

To help build its budding streaming service during this pandemic, Disney decided to release the new, live-action version of its popular 1998 animated film “Mulan” on Disney+.

But unlike “Hamilton” and Beyonce’s “Black is King,” Disney is levying an additional ‘premium’ charge of $29.99 on top of the subscribers’ $6.99 monthly fee. This experiment capitalizes on growing demand for at-home movie-watching.

Based on the Chinese ballad of Hua Mulan, the plot follows an intrepid young woman (Yifei Liu) from a small village who poses as a man so she can take her father’s place, defending the Emperor (Jet Li) in the war against the Rouran, led by Bori Khan (Jason Scott Lee).

Agile and acrobatic, Hua Mulan’s audacious independence worries her parents (Rosalind Cho, Tzi Ma) who are shamed when Mulan steals her aging father’s sword and armor to take his place in the Imperial Army, gaining confidence in her fighting skills and earning the admiration of Chen Honghui (Yoson An).

Beijing’s Yifei Liu beat out 1,000 other actresses to snag the titular role for which she trained seven hours a day for three months. The scene of warriors on horseback, swiveling in the saddle to shoot arrows, is breathtaking!

While Yifei Liu performs most of her own stunts — riding, sword-fighting and martial arts — Gong Li steals the picture as the enigmatic warrior-sorceress Xianniang. Wearing a face-paint mask and intricate headgear, she transforms into various shapes, including a menacing flock of birds.

And kudos to cinematographer Mandy Walker, who captures majestic landscapes and superbly-choreographed fight sequences in this $200-million film, the priciest of Disney’s recent live-action remakes, including “The Lion King” and “Aladdin.”

FYI: In terms of diversity, despite the success of “Parasite” and “Crazy Rich Asians,” Asians are underrepresented on the big screen despite Asian Americans being the fastest-growing demographic. And Min-Na Wen (the original animated voice of Mulan) does a cameo, introducing Mulan to the Emperor.

On the Granger Movie Gauge of 1 to 10, “Mulan” is an exciting, action-packed 8. As long as you maintain your Disney+ subscription, you can watch it as many times as you like.

If you subscribe to Disney+, you also have access to “The One and Only Ivan,” a heartwarming, live-action/CGI adventure that’s about friendship, freedom and the power of visualization.

Ivan (voiced by Sam Rockwell) is a soulful, 400-pound silverback gorilla who lives in a cage as part of a tiny circus in a suburban shopping mall. He shares a communal habitat with Stella (voiced by Angelina Jolie), an aging elephant, and the brusque dog Bob (voiced by Danny DeVito).

Ivan’s best-friend is young Julia (Ariana Greenblatt), daughter of mall employee George (Ramon Rodriguez). When Julia shares some of her broken crayons with Ivan, they discover that Ivan loves to draw and paint — acclaimed as “a primate Picasso.”

Much to the chagrin of Ringmaster Mack (Bryan Cranston), business is declining until an adorable baby pachyderm named Ruby (voiced by Brooklyn Prince) arrives, and Ivan considers how to change the constricted confines of their lives.

Based on Katherine Applegate’s Newberry Medal 2012 bestseller, it’s adapted by Mike white and directed by Thea Sharrock with cinematography by Florian Ballhaus. Reminiscent of “Charlotte’s Web,” it’s family-friendly, filled with a poignant melancholy.

Angelina Jolie recalls her daughter Shiloh read the book and urged her to get involved as one of the producers: “This younger generation is aware of what’s happening in the world to our natural habitats, to these animals — the gorillas, the elephants. As a mother, as an artist, this film is important.”

FYI: The ‘real’ Ivan lived at B & I Amusement Center in Tacoma, Washington, for 27 years, having been raised by humans until he was six. After protests by animal welfare activists, he was sent to Zoo Atlanta.

On the Granger Gauge, “The One and Only Ivan” is a sweet 6, a touching, tender tale for tiny tots.

The Westport Downtown Merchants Association (WDMA) said it will hold its first Health and Fitness Expo on Westport’s lower Main Street on Saturday, Sept. 12 from 10 a.m. to 4 p.m.

“Our goal is to inspire and inform our community as we prepare for fall and winter,” an announcement said.

There will not be any walk up opportunities to join a class. Each gym will be recruiting its own members and follow COVID-19 requirements and gym policies for participating members.

Masks, social distancing and wait line markings will be required, COVID-19 safety rules will be followed, the announcement said.

Additional health activities will be coordinated from Church Lane merchants.

A limited number of vendor booths are available, the WDMA said. Contact Jacqui Bidgood at .(JavaScript must be enabled to view this email address) for health & fitness industry interest in participating.