The state said today its Westport COVID-19 case count and number of deaths are unchanged at 379 (363 confirmed and 16 probable) cases and 23 deaths.

The Westport-Weston Chamber of Commerce (WWCC) and Westport Library today announced two candidate forums via Zoom, the first set for Tuesday, Oct. 6, the second, Tuesday, Oct. 13. Both will be held at noon.

“Once again we are pleased to offer this service to the community during these unprecedented times,” said Matthew Mandell, WWCC executive director. “Who leads us out of this pandemic and the clear economic impacts due to it is of the utmost of importance.”

“The Westport Library is pleased to host these important conversations with candidates for the state legislature,” said Westport Library Executive Director Bill Harmer. “Civic and community engagement is fundamental purpose of a public library.”

Those interested in seeing the debates can register by visiting www.westportwestonchamber.com and following the links.

William F. DePalma of Weston and former long-time resident of Westport died Sept. 29, He was 76. For 54 years, he was the beloved husband of Marie (Donofrio) DePalma.

Billy was born on Aug. 20, 1944 to Carl and Lucille (Bussiere) DePalma. He was a master plumber and ran a successful business in Westport, DePalma’s Plumbing & Heating, for more than 50 years. Billy was an avid golfer, like to shoot pool at the senior center, throw horseshoes, bowl, and build furniture. Billy enjoyed being with his family and friends, telling stories, laughing, and having a beer. He was a member of the Westport Screwball Club. Billy was a loving husband, father and grandfather to LilyMarie & Joey who affectionately referred to him as Papa.

In addition to Marie, Billy is survived by his two daughters; Diane DePalma Vullo and husband Joe of Cavendish, VT; Debra DePalma and her partner, Geoff Morse, of Boston, MA; a brother, Richard DePalma, of Peru, MA; a sister, Patti DePalma Slesinski, of Kennett Square, PA, his grandchildren, several nieces and nephews and many long-time friends. He is predeceased by his brother, Donny DePalma.

The family will receive friends in the Harding Funeral Home at 210 Post Road East in Westport on Friday, Oct. 2 from 4 p.m. – 8 p.m. for a walk-through visitation. Interment will be private. Condolences for the family may be left online at http://www.hardingfuneral.com. Memorial contributions in lieu of flowers may be made to the Alzheimer’s Association, 2075 Silas Dean Highway, Suite 100, Rocky Hill, CT 06067.

The state said today its Westport COVID-19 case count and number of deaths are unchanged at 379 (363 confirmed and 16 probable) cases and 23 deaths. 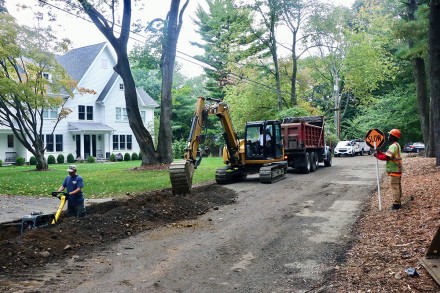 Westport’s Public Works Department announced today that the Oct. 3 Household Hazardous Waste Day has been postponed until the Spring. “We apologize for any inconvenience,” the announcement said.

In the meantime, residents with household hazardous waste may check the Connecticut Department of Energy & Environmental Protection (DEEP) website for disposal options. They may also dispose of their hazardous waste for a fee by contacting Clean Harbors at (860) 583-8917, according to the announcement.

The announcement reminded residents that the Westport Transfer Station at 300 Sherwood Island Connector accepts most types of latex and oil paints, antifreeze, motor oil, batteries of any type, fluorescent bulbs, compact fluorescent bulbs, and electronics. The Transfer Station is open Monday through Friday from 7:00 a.m. through 2:30 p.m., and Saturday from 7 a.m. to noon.

“Early this evening Dr. Debra Dunn, Principal of Long Lots Elementary School, learned of a positive COVID-19 test in one of the school’s fifth grade classes,” he said in an email to parents.

“The affected person will be excluded from the school environment and has been instructed to quarantine at home.”

He said upon learning of the positive COVID-19 case, the administration began immediate contact tracing.

“Those determined to be ‘close contacts,’ including some staff members, and one fifth grade class of students, have been notified.

He added: “These individuals spent a significant amount of time in the presence of the positive case, and as a result, were informed that they will be excluded from the school environment and recommended to quarantine for 14 days and may return to school on Oct. 12.

“They were also asked to reach out to their health care provider to obtain testing. To be clear, siblings and other family members of these children and staff do not need to quarantine.”

The second season of Jon Favreau’s blockbuster live-action Disney+ series, “The Mandalorian,” a sci-fi spin-off from George Lucas’ “Star Wars,” begins on October 30, so you have plenty of time to stream the first season.

Set five years after “Return of the Jedi”—meaning the Empire has fallen and the New Republic is in its ascendancy—this intergalactic adventure revolves around the mysterious, perpetually helmeted bounty hunter Din Djarin (Pedro Pascal), an orphan who was rescued and raised by Mandalorian warriors.

When he refuses to relinquish a mysterious prize, the powerful infant known as The Child (Baby Yoda), to The Client (Werner Herzog), Mando becomes its protector, aided by a pig-faced Ugnaught (voiced by Nick Nolte).

In the second season, Mando launches a search for The Child’s origin and species, perhaps with the help of “loner” mercenary Cara Dune (former MMA fighter Gina Carano).

Meanwhile, there are eight episodes in season #1, each a separate encounter, tied together by Carl Weathers (Apollo Creed in the “Rocky” franchise), who plays Bounty Hunter Guild Chief Greef Karga.

Showrunner Jon Favreau was determined to create a saga steeped in the lore of the past while introducing entirely new characters, much as he did directing the first “Iron Man” (2008), launching the Marvel Cinematic Universe.

Unlike the traditional “green-screen,” actors can now see the background and cinematographers can match perspectives and camera parallax to look like they’re on location.

On the Granger Movie Gauge of 1 to 10, “The Mandalorian” is an action-packed, exciting 8, streaming on Disney+.

“Why do we paint?” celebrated abstract artist Richard Smythson (Bruce Dern) asks in “The Artist’s Wife.” “We paint because we have no choice.”

But his much younger wife Claire Smythson (Lena Olin) is faced with a different choice. How will she support her elderly husband now that he’s been diagnosed with Alzheimer’s/dementia?

“I’ve given up on many things in my life,” she tells Angela (Juliet Rylance), Richard’s long-estranged lesbian daughter from a previous marriage. “But I never gave up on your father.”

Devoted Claire has put aside her own painting career to serve as her husband’s caregiver/muse. In an interview, he acknowledges: “I create the art. She creates the rest of our lives.”

Yet their serenity will never be the same. Claire is helping Richard prepare for his final show as his memory deteriorates and his behavior becomes more boorish, particularly when Claire invites Angela and her six year-old son Gogo (Ravi Cabot-Conyers) to celebrate Christmas with them in the Hamptons, along with the Danny (Avan Jogia), the young musician who serves as Gogo’s babysitter.

As Claire tries to connect with her own creativity and reclaim her identity, she’s encouraged by fellow artist Ada Risi (Stefanie Powers), who strips for a graphically nude “fashion shoot.”

Swedish actress Lena Olin delivers a graceful, sensual performance, not unlike her turn as a free-spirited painter in “The Unbearable Lightness Of Being” (1988). Olin has collaborated with her husband Lasse Hallstrom on “Chocolat” (2000) and “Casanova (2005) and will star in his upcoming biopic of little-known Swedish artist Hilma af Klint, who died in 1944.

Written by director Tom Dolby, along with Nicole Brending and Abdi Nazemian, the pulpy plot’s not only predictable but somewhat similar to the Glenn Close/Jonathan Pryce 2018 drama “The Wife.” Although it evokes memories of the relationship between Lee Krasner & Jackson Pollack, it was apparently inspired by events experienced by Dolby’s parents; his father was famed sound engineer Ray Dolby.

On the Granger Gauge, “The Artist’s Wife” is a submissive 7, streaming on iTunes and Amazon Prime.

If the dreary dirge “The Devil All the Time” didn’t have an all-star cast, it would never have been green-lit—and, sadly, the actors cannot save it.

Emma’s already caring for another orphan, Leonora (Eliza Scanlen), whose crazy preacher father (Harry Melling) killed her mother (Mia Wasikowska) in a religious fervor, believing that he would be able to resurrect her.

Meanwhile, a crooked sheriff (Sebastian Stan) is tracking an amateur photographer (Jason Clarke) and his wife (Riley Keough). She’s the sheriff’s sister who worked in that diner with Charlotte. Their diversion is to pick up hitchhikers and force them to engage in sex rituals which lead to their violent demise.

Based on the novel by Donald Ray Pollock, who laconically narrates the sprawling, convoluted noir plot, it’s adapted by director Antonio Compos and his brother, Paulo Campos, with too many confusing, intertwined flashbacks/vignettes, wallowing in lurid, demented depravity.

The Gothic backwoods characters are so superficial that they fail to elicit sympathy or even empathy on the part of the audience. While Bill Skarsgard (best known as Pennywise the Clown in “It”) and Tom Holland (best known as “Spider-Man”) deliver credible performances, Robert Pattinson’s nasal whine barely passes for a Southern accent.

On the Granger Gauge, “The Devil All the Time” is a grimly voyeuristic, futile 4, not worth your time.