Washington –  Sen. Richard Blumenthal was among those being tested for the coronavirus today following President Donald Trump’s announcement that he has contracted COVID-19, unleashing a wave of concern about the president’s recent contacts.

Blumenthal had been at a Senate Judiciary Committee hearing on Thursday that was also attended by Sen. Mike Lee, R-Utah, who announced today he has tested positive for the virus.

Lee had also been at Trump’s Rose Garden announcement of Amy Coney Barrett’s nomination to the Supreme Court on Saturday, sitting, without a mask, with other Republicans on the Judiciary Committee.

Spokeswoman Maria McElwain said Blumenthal had sat across the room from Lee at Thursday’s Judiciary Committee hearing, but was getting tested “out of an abundance of caution.”

Unable to block Barrett’s nomination, Senate Democrats, including Blumenthal and Sen. Chris Murphy, are trying to delay proceedings. Today, the announcement that Lee has tested positive for COVID-19 was another reason Democrats cited to slow down the confirmation process.

Senate Minority Leader Charles Schumer of New York and Sen. Dianne Feinstein of California, the top Democrat on the Judiciary Committee, cited Lee’s illness as a reason to delay the confirmation hearings for Barrett. They said virtual hearings, proposed by Senate Judiciary Committee Chairman Lindsey Graham, R-S.C. would not be acceptable.

“It is premature for Chairman Graham to commit to a hearing schedule when we do not know the full extent of potential exposure stemming from the president’s infection and before the White House puts in place a contact tracing plan to prevent further spread of the disease,” Schumer and Feinstein said in a joint statement.

Meanwhile, Lee, today tweeted that he took the test Thursday, and would “remain isolated” for 10 days. He said he has “assured” Senate Republican leaders that he will “be back to work” to join the Judiciary panel to advance Barrett’s nomination.

Lee had accepted a “courtesy call” from Barrett this week. The nominee was administered a COVID-19 test following the news that Trump tested positive for the virus. It came back negative.

Murphy said Senate Majority Leader Mitch McConnell, R-Ky., should implement new protocols to keep senators and their staff safe, including mandatory mask policy in the Capitol complex and implementation of a regular testing program for all senators and all Senate staff, including the Capitol police and cleaning, postal, and food service staff.

“No business should move forward in the Senate until we implement these protocols and have a full understanding of the scope of the White House spread,” Murphy said.

During a Friday teleconference with Planned Parenthood, Blumenthal said “our priorities should be the health and economic well-being of the nation.”

He also said “we should take the time that is needed to review [Barrett’s] record” and the confirmation process should not be rushed.

Senate Republican leaders have set a tight schedule for Barrett’s confirmation, with four days of hearings in the Senate Judiciary Committee scheduled to begin Oct. 12 and a confirmation vote set for the end of the month, just days before the election.

Earlier in the week, before the president announced that he and the First Lady had tested positive for the virus, Blumenthal and all other Democrats on the Senate Judiciary Committee sent Graham a letter demanding more time to vet the nominee.

“This timeline is a sharp departure from past practice. Even more, it undercuts the Senate’s ability to fulfill its advice and consent role and deprives the American people of a meaningful opportunity to gauge the nominee and her record for themselves,” the senators wrote.

Meanwhile, today McConnell gave no indication that he expects Trump’s coronavirus results, and the uncertainty about those who have been in close contact with the president, will change the GOP’s schedule for trying to confirm Barrett.

“We will be voting on the nominee, you know, very soon. I haven’t picked an exact point to bring the nomination up, but it’s front and center for the American people and as we move ahead I’ll be more specific” about the timeline, McConnell said.

Westport property transfers as reported by the Town Clerk’s office for the period Sept. 14-18, 2020:

The Connecticut Department of Public Health has issued its recommendation on what Halloween should look like during the coronavirus pandemic — and door-to-door trick-or-treating is not part of the plan.

“Traditional Halloween activities carry a high risk for spreading COVID-19, but we can reduce that risk significantly by organizing and participating in fun, lower or moderate risk alternatives,” the health department said in a posting on its website.

“The holiday may look different this year, but the Connecticut Department of Public Health (CT DPH) believes we can still enjoy a happy (and healthy) Halloween.”

The recommendations are generally in line with ones provided by the federal Centers for Disease Control and Prevention last month.

“Traditional trick-or-treating is a high risk activity,” the posting reads. “Instead, the CDC and CT DPH recommends participating in one-way trick-or-treating where goodie bags or a large bowl of candy are placed outside of your home for families to grab and go while continuing to social distance.”

Those who choose to hand out candy at their doors are urged to wear masks before answering the door, remain 6 feet from trick-or-treaters and to place candy inside the child’s bag instead of having them reach into a bowl to grab it themselves.

The state said today its Westport COVID-19 case count was up one at 380 (364 confirmed and 16 probable) and deaths unchanged at 23.

Connecticut has now recorded a 1.3% positivity rate over the past seven days, up from as low as 0.7% over the summer.

The state now has 107 patients hospitalized with COVID-19, up three from Wednesday and up 32 since Monday.

“We’ve got an uptick,” Lamont said Thursday. “Are we surprised by this? No. I think it was something that we anticipated.” 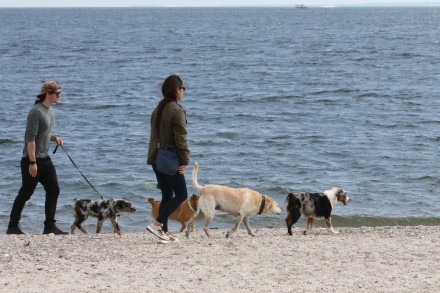 Dogs returned today to Westport’s Compo Beach until March 31. Dogs are not allowed in the Pavilion or on the Playground or the Boardwalk. Dogs must be leashed except in designated off-leash areas south of the Pavilion, including South Beach. Owners must clean up after their dogs or face a $77 fine. (CLICK TO ENLARGE) Dave Matlow for WestportNow.com

Marge L. Oliphant of Westport died Sept. 25 at Regional Hospice in Danbury. She was 80.

Born in New York City, Marge had been a Westport resident for over 50 years. A 1957 graduate of White Plains High School, she later received her Bachelor’s Degree from Curry College.

Marge was well known in the retail sales scene on Main Street in Westport where she worked in various boutiques over the years. Her greatest joy however, was spending time with her beloved children and cherished grandchildren.

She will be sadly missed by her three children: Laura Hebeler and her husband Curt of Fairfield, Jeff Oliphant of Naples, FL and daughter-in-law Erika Muik of Orange, Perry Oliphant and his wife Rose of Seymour; and five grandchildren, Blake and Taylor Bargmann, Aubri and Eli Oliphant and Jacob Oliphant.

Due to current conditions, a private service will be held. In lieu of flowers, friends may consider a donation in Marge’s memory to The St. Jude Children’s Research Hospital (http://www.stjude.org). 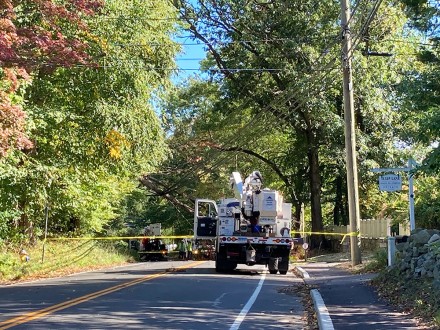 A large tree fell across North Avenue, between Willow Walk Lane and Wedgewood Road, and knocked out power to the area and closed the street until it could be removed.  (CLICK TO ENLARGE) Jaime Bairaktaris for WestportNow.com

UPDATE —The Westport Police Department’s investigation into the threatening signs posted Sunday in the downtown has “yielded information on two responsible parties.”

“With that significant development, the department wishes to take this opportunity to assure all that there is currently no viable threat to the community relative to this incident,” Lt. Anthony Prezioso said.

He added that the investigation involved “close collaboration with federal law enforcement officials based on some of the statements directly expressed in these postings.” The signs, most of them posted on Church Lane, read as follows: “This Town is Ours, Kill Trump, Fight the White,” “Only Good Cop—A Dead Cop,” and “Kill Trump and Once We Win, We’re Coming to Westport.”

Another one is a picture of a bloody fist with the words “Black Lives Matter” on top and a message below stating “War Is Coming.”

“No investigative avenue is being unexplored,” Prezioso said when asked about video surveillance, even fingerprints left behind.

“Our main concern is that it may transition from words to action,” he added, “That behooves us to have an active investigation.”

“The concern among the community is very real,” Prezioso said.

He said the fact “the majority of the community has condemned this,” demonstrates the town’s support for the Police Department.

On Tuesday, a bipartisan show of unity condemning the signs came from chairpersons the Republican Town Committee (RTC) and Democratic Town Committee (DTC), as well as Westport’s elected officials.

“We publicly and jointly denounce the hateful messaging that was discovered in town on Sunday morning,” the statement said. “We believe that regardless of political affiliation or personal beliefs, there is no place for disrespect, hateful messaging or violence to express one’s perspective.

“We hope that all Westport residents will do what they can to maintain civility both leading up to and beyond Election Day,” it added.