The novel coronavirus is spreading in Connecticut with COVID-19 cases increasing in the I-84 corridor from Hartford to Waterbury, staying high in smaller towns to the east and producing a stunning flare-up in Norwalk, state officials said today.

Updated every Thursday, the state’s COVID alert map is ablaze in autumn colors — yellows, oranges and reds that show residents where the infection is active. Last week, much of the map was gray —signifying communities with fewer than 5 cases per 100,000 people.

Gov. Ned Lamont, his public-health adviser and other top aides described a spread that so far cannot be linked in a significant way to reopened schools and eased restrictions on commerce. The culprit is small interactions, not super-spreader events.

“Turning this around is within our own personal control,” said Dr. Deidre Gifford, the acting commissioner of public health.

The state is emphasizing the 3 Ws: Wearing a mask, washing hands and watching your distance from others. The daily rate of positive COVID tests was 2.3% of the 22,117 reported, a percentage point higher than a week ago. The seven-day rolling average was 2.1%.

Hospitalizations from COVID were up 19 to 232 today. That is three times the level of just a month ago but still only a small fraction of the 2,000 at the peak in the spring. Thirty-nine of those hospitalized with COVID were in intensive care. About one quarter of all hospital beds and half of ICU beds are available.

“Panic is not helpful in this kind of a situation, but action and well-informed strategic action is helpful, so I think we should all be concerned and then take the appropriate actions,” Gifford said.

Red-alert communities have the option of returning to Phase 2 of COVID restrictions, which limit indoor dining at restaurants to 50% of capacity and impose other limits on public venues. The state went to Phase 3 on Oct. 8, allowing 75% capacity at restaurants and the the limited reopening of theaters.

The governor and Gifford said the paucity of cases traced to large public gatherings argues in favor of enforcing rules on wearing face covering and encouraging hand-washing and social distancing, which Lamont acknowledged will get more challenging as socializing goes indoors and the holidays approach.

Lamont sounded like a parent telling a family that holiday plans would have to be changed, when they had hopes of a festive season.

“Here we go again. I know we’re now moving into the holiday season. We’ve got Halloween in about 10 days and Thanksgiving thereafter,” Lamont said.

Lamont urged residents to take a break from Thanksgiving dinners that can crowd three generations around dining tables that otherwise go unused for much of the year. He is reluctantly suspending another holiday at the Executive Residence, the distribution of candy.

“This year, for the first year, we’re not going to be able to do Halloween at the governor’s residence. We’re in Hartford, and it is in a red zone. And we do attract a crowd,” he said. “And I say that with great disappointment.”

Hartford was in the red zone last week and again Thursday. New on Thursday were Waterbury, Norwalk and Fairfield. Cases in Fairfield were largely traced to Fairfield University and Sacred Heart, but community spread among networks of friends and families were the major driver.

In Norwalk, the numbers were stunning: a jump of 72 to 163 active infections in just two weeks. The community has a testing positivity rate of 5%, more than double the state average. Gifford said the speed and reach of the flareup in Norwalk was the latest reminder that COVID-19 is extremely contagious.

Lamont, who is 66, urged people to vote by absentee, an option available to every Connecticut voter due to the COVID this year. But the governor intends to cast his ballot in person, while wearing a mask and observing social-distancing protocols, at his local precinct in Greenwich.

He wants people to be safe, but he also wants them to feel secure in voting.

“That’s a message I wanted to send,” he said.

The announcement said that Marpe will stay quarantined for the requisite two weeks or until he receives a negative Polymerase Chain Reaction, or PCR COVID-19 test.

“In accordance with CDC guidelines and medical advice, he is self-isolating and is awaiting COVID-19 test results,” the announcement said. “In an abundance of caution, Mr. Marpe is currently advising all individuals with whom he came into contact of the situation, and he is taking the proper precautions.”

According to Mark Cooper, director of the Westport Weston Health District (WWHD, Marpe, “based on his actions, he does not appear to have exposed anyone.”

“If any symptoms are to develop or his test result is positive, the WWHD will commence contact tracing to know who he has been in close contact with since Sunday or during the preceding 48 hours of either when he was tested, or when the first symptoms present themselves,” Cooper said.

In light of his situation, Marpe reminded residents to wear a face covering, to social distance and to practice good hygiene and sanitary measures.

He said residents can continue to stay connected to learn more about COVID 19 in town by signing up or following town announcements at: www.westportct.gov/COVID19 and by signing up for emergency alerts.

The state said today its Westport COVID-19 case count was up five at 411 (394 confirmed and 17 probable) and deaths unchanged at 23.

Helene was born in Stamford on Nov. 20, 1924 and is the daughter of the late John and Agnes Wadejko.

She was the owner of the Arrow Restaurant in Westport for many years and remained very active in the Westport community even after the restaurant closed. Helene loved sewing, golfing, and traveling.

Friends are invited to attend a graveside service on Wednesday, Oct. 28, leaving from the Harding Funeral Home, 210 Post Road East, Westport in procession at 10:45 a.m. The service will be in Christ and Holy Trinity Cemetery on Kings Highway, Westport at 11:00 a.m.

Condolences for Helene’s family may be left on line at www.hardingfuneral.com. Memorial contributions in lieu of flowers may be made to the American Heart Association, PO Box 5022. Waterbury, CT 06492.

Bruce Courcier of Falmouth, Massachusetts died Oct. 11 at his home after a courageous battle with cancer. He was 70.

He married Carol Lynn (Thompson) Courcier in 1979, who survives him. Together for 45 years, Carol Lynn was his partner and best friend. Bruce was a dedicated husband, father, and grandfather. He is survived by his son Robert Courcier, grandson Thompson Courcier, daughter Sarah Courcier all of Martha’s Vineyard, daughter Caity Crowley and son-in-law Joe Crowley of Rhode Island.

He will be remembered by his love and devotion to his family, from hockey practice car rides to hours spent watching his daughters figure skate.

He was born to parents Robert and Dorothy Courcier on Nov. 15, 1949 in Norwalk. Bruce grew up in Westport and graduated from Staples High School. He had fond memories of his early life in Westport, boating on Long Island Sound and attending Mets games at Shea Stadium. He loved riding and racing motorcycles and going fast.

Bruce was the second oldest of seven siblings. He is predeceased by his sister Suzanne Courcier and brother Brad Courcier, He is survived by sisters Lisa Courcier, Leslie Smith, Christina Courcier, brother Matt Courcier, and nieces and nephews.

Bruce and Carol Lynn moved to Cape Cod in 1978 to raise their family. Bruce had an uncanny ability to diagnose engine problems and could fix almost anything. He built a successful career as a business owner of Foreign Car Parts of Falmouth and as a partner of Paul’s Precision Automotive.

Bruce became involved in the community of Falmouth, serving on the Board of Directors of the Falmouth Youth Hockey League and on the board of the Governors of the Woods Hole Yacht Club. He was an avid runner and sailor, completing the Falmouth Road Race every August and spending many hours sailing through Vineyard Sound. Bruce had a passion for being on the water, whether it was fishing in Woods Hole Passage, racing Cape Cod knockabouts around Nobska, or simply cruising to Hadley Harbor. His sense of adventure, generous spirit, and compassionate nature will be deeply missed. 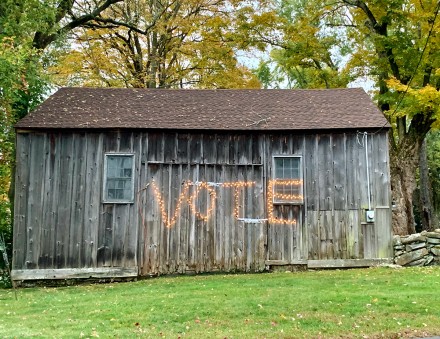 Illuminated message: VOTE, on a barn on Cross Highway. (CLICK TO ENLARGE) Lynn Miller for WestportNow.com 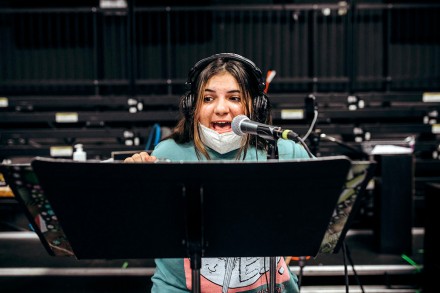 Staples Players isn’t allowing COVID-19 to keep them from performing. Instead, they’re offering free radio performances via WWPT 90.3 FM or livestream at www.wwptfm.org. Three performances are scheduled: “The Wizard of Oz” at 6 p.m. on Sunday, Oct. 25; “Pride & Prejudice” on Sunday, Nov. 8 at 6 p.m.; and “It’s a Wonderful Life” at 6 p.m. on Sunday, Nov. 22. Above, Sophia Betit (SHS ‘23) in a recording session for “The Wizard of Oz,” in which she plays a Munchkin. (CLICK TO ENLARGE) Kerry Long for WestportNow.com

The state said today its Westport COVID-19 case count was unchanged at 406 (389 confirmed and 17 probable) and deaths also unchanged at 23.

More than a month after Connecticut’s positive COVID-19 test rate began steadily rising, the state now appears to be seeing a similar rise in coronavirus-related deaths, according to data released by Gov. Ned Lamont’s office.

And while both of those numbers dropped slightly today — positivity rate dipped to 2.6% and hospitalizations dropped by four to 213 — the data shows that deaths are now also on the rise