If you’re not registered but want to vote Nov. 3, and are eligible to vote in Westport, you can head to the Town Hall Auditorium (110 Myrtle Ave.) between 6 a.m. and 8 p.m. for Election Day Registration. Enter from the parking lot in the rear. The registration process on Election Day takes longer than the process of voting, especially with COVID-19 restrictions in place, so plan to get there as early as possible.

You must appear in person (please wear a mask) and provide proof of your identity and residence. Proof can be a current Connecticut driver’s license, ID card, or Learner’s Permit (adhesive strips with change of address is acceptable). Proof of identity examples are birth certificate, passport, college photo ID, out-of-state or Connecticut driver’s license without Westport address change. 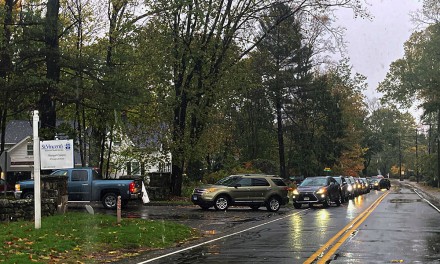 Cars lined up outside the Hartford Healthcare Long Lots Road COVID-19 testing site this morning. The line could be seen stretching past Morningside Drive North as snow fell in the area. (CLICK TO ENLARGE) Jaime Bairaktaris for WestportNow.com 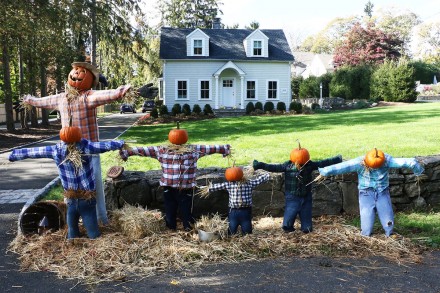 Go give the scarecrows a big hug at 100 Hillspoint Road! A scary entry, one of 36, in the Halloween House Decorating contest sponsored by Westport’s Parks & Recreation Department (click here for more information). (CLICK TO ENLARGE) Dave Matlow for WestportNow.com 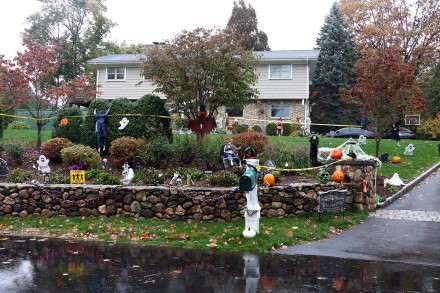 Ghosts and other creepy things wreak havoc at 6 Loren Lane! A spine-tingling entry, one of 36, in the Halloween House Decorating contest sponsored by Westport’s Parks & Recreation Department (click here for more information). (CLICK TO ENLARGE) Dave Matlow for WestportNow.com 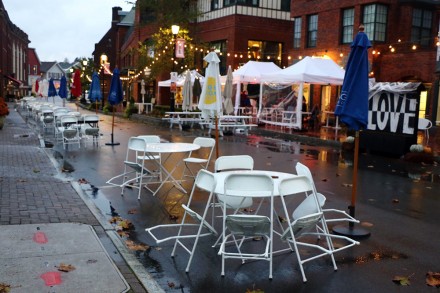 Connecticut’s daily coronavirus infection test rate soared beyond 6% on Thursday — roughly six times the daily rate the state faced all summer and early into the fall.

A somber Gov. Ned Lamont warned residents to brace for the worst, but he opted not to reverse the Oct. 8 easing of restrictions on business activities.

Instead, the governor granted more municipalities flexibility to tighten rules on businesses within their own borders — though he warned he could order new restrictions statewide as soon as next week.

“I looked hard to find a silver lining, and I can’t find it in these numbers,” Lamont said during a televised briefing on the state’s public access channel.

Of the 21,739 COVID-19 tests completed by public and private labs Wednesday, 1,319 came back positive, a rate of 6.1% The administration also reported five more deaths due to coronavirus, bringing the total since the pandemic began to 4,609.

Hospitalizations due to the virus also jumped by 12 in the latest report, bringing the statewide total to 321.

It took all summer and three weeks into the fall for daily infection rates to rise from 1% to 2%. It then took just one week to clear the 3% mark on Oct. 20, and another seven days — until Tuesday — to exceed 4%.

Throughout that surge, the governor has said he wouldn’t consider stalling or reversing Connecticut’s business re-openings unless the state’s weekly average infection rate — a much more important metric for most healthcare officials — approached or exceeded 5%.

Connecticut’s weekly average, through the latest report, stands at 3.4%.

But Lamont acknowledged Thursday that the accelerating infection surge is a concern.

“I was hoping it was more gradual,” he said. “Today may be a harbinger that it’s steeper than that.”

But the governor had announced earlier this month that communities with more than 15 coronavirus cases per 100,000 residents — based on two weeks of test results — could opt to roll back the Phase 3 rules for businesses.

Windham is the only one out of 30 communities eligible to tighten business rules.

The governor broadened that option Thursday, saying communities with more than 10 cases per 100,000 residents also could roll back Phase 3.

That means about half of all Connecticut’s 169 cities and towns, 85 in total, now can tighten rules on businesses. Those communities contain about 70% of Connecticut’s population, the governor said, urging them to follow Windham’s example.

First Selectman Jim Marpe today urged parents to consider alternate plans for their children’s trick-or-treating this Halloween since a number of homes are not participating for fear of the coronavirus.

“Those choosing to trick-or-treat this Halloween should be aware that there has been an increasing number of calls to town departments from Westport residents who do not wish to accept trick-or-treaters at their doors this year,” Marpe said.

“Parents and youth who are considering trick-or-treating this year are advised to consider alternate plans for the holiday considering that many homes may not be participating,” he added.

Marpe said The Centers for Disease Control (CDC) considers traditional trick-or-treating to be “a high-risk activity and should be avoided.”

“Rather, it recommends alternatives for celebrating the holiday with lower risk activities and small events that allow for reduced exposure and ease of contact tracing,” he said. “For the health and safety of the public, please remember that the state has capped the number of attendees at all private indoor gatherings at 25.”

Marpe added that the Compo Beach and the Soundview Parking Lot will be closed to parking at 3 p.m. Saturday, to discourage crowds in the neighborhood. Parking at Compo Beach after 3 p.m. Halloween will only be made available for Compo Marina slip holders. 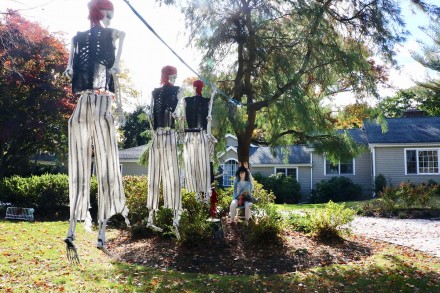 Pirates return to settle up at 15 Silver Brook Road! A spooky entry, one of 36, in the Halloween House Decorating contest sponsored by Westport’s Parks & Recreation Department (click here for more information). (CLICK TO ENLARGE) Dave Matlow for WestportNow.com