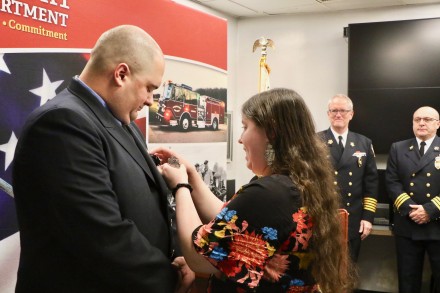 Westport firefighter Anthony Maisano was promoted to the rank of lieutenant at a ceremony conducted today at Fire Headquarters. His fiance Shannon Burke pinned on the new badge. Masiano was appointed a Westport firefighter in November 2012. A member of police/firefighter dive team and hazmat team. Masiano is a graduate of the University of New Haven where he earned a B.S. in fire administration and arson investigation as well as a BS in criminal Justice. (CLICK TO ENLARGE) Dave Matlow for WestportNow.com