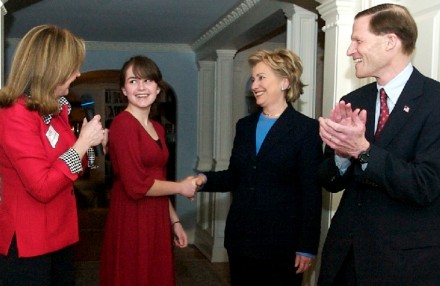 Kristan Peters-Hamlin (l) introduces Hillary Rodham Clinton tonight to her daughter Brittany, 14, at a fund-raiser her family hosted at their home on Westport’s Compo Parkway. Attorney General Richard Blumenthal, a Yale Law School classmate of Clinton’s, listens. Peters-Hamlin said Clinton’s candidacy for the Democratic presidential nomination was an inspiration for little girls and women around the nation. She recalled for the crowd a story of how when Brittany was 5 years old, she saw a “learning placemat” that had all the presidents of the United States pictured and asked why, if half the nation was female, there were no women presidents. Her mother explained why, and Brittany did not feel that was fair. Hamlin-Peters promised that in both her lifetime and Brittany’s, that would change. Tonight, 10 years later, her mother introduced Brittany to Clinton and told her daughter: “I told you so, Brittany. Meet the next president of the United States of America—a woman!” (CLICK TO ENLARGE) Randy Ramirez for WestportNow.com