In a sweeping assessment as his administration approaches its third anniversary, Westport First Selectman Jim Marpe said today the town remains “an attractive, vibrant community” but warned it must prepare for tough times ahead. 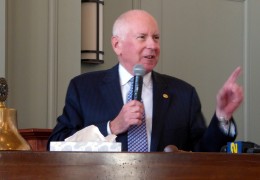 Addressing the weekly meeting of the Westport Rotary Club, Marpe, who turns 70 next Tuesday, said, “Westport looks great while the state implodes around us.”

“Sooner or later, we’ll come to the next recession,” he said. He noted that many Westport residents are tied to the financial industry and would be impacted by a worsening economic environment.

Marpe said Westport is faring much better than surrounding communities and its grand list is the envy of their elected officials. But he said that the town has yet to recover fully from the last recession. “We’re back to where we were five or six years ago,” he said.

Westport’s finances are in good shape, Marpe said. But he said the state’s financial problems have left Westport with $2 million less in state funding.

He said the town must be prepared for a continuing reduction in state aid. To that end, he said he and Board of Finance Chair Brian Stern have met with state officials to seek relief from unfunded state mandates.

As part of his efforts, Marpe noted he had just come from a tough labor negotiating session. While he is striving to recognize town employees for their service, he said it is important that future labor contracts align the town’s retirement benefits with those offered in the private sector.

Among his current concerns, Marpe said, is redevelopment of the Saugatuck area around the train station. He said the town’s receipt of a $440,000 state grant for a transit oriented development (TOD) study of the area would be sensitive to property owners there.

“We’re not trying to tell private property owners what to do,” he said.

Marpe said negotiations with the state on rehabilitating the William F. Cribari Bridge in Saugatuck will likely be a “long battle to maintain the historic character” of the bridge.

“The challenge in my job is that everybody has three opinions on everything and are happy to share them with me,” he said.

The issue of affordable housing in Westport is a continuing challenge, he said. “We’re not an urban community,” Marpe said, “and that is part of its charm.”

Asked about planned affordable housing on Post Road East and at the intersection of Kings Highway North and Wilton Road, Marpe said town was in court on the latter project.

Whether achieving moratorium points for the Post Road East project will impact the outcome of the Kings Highway North/Wilton Road project was an unknown, Marpe said.

“It doesn’t count until it’s built,” he said.

Marpe, who has yet to announce whether he will seek a second term, laughed at a questioner who asked whether he might have some interest in helping reform the state by taking a job in Hartford.

He said on some tough days at the office he often returns home and asks his wife, Mary Ellen, “What was that all about?” And often her response is to “have a drink,” Marpe said.

One thought on “Marpe: Be Prepared for Tough Times Ahead”