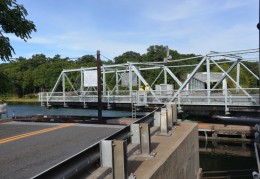 The William F. Cribari Memorial Bridge during a recent opening. (CLICK TO ENLARGE) Helen Klisser During for WestportNow.com

The Representative Town Meeting’s (RTM) Planning and Zoning (P&Z) Committee voted unanimously on a request from the Historic District Commission (HDC) to act as the study committee for the bridge’s possible designation. The matter will now go to the full RTM on Tuesday.

The request had the full support of First Selectman Jim Marpe.

A Connecticut Department of Transportation (CDOT) study almost a year ago, however, found the state-owned Route 136 bridge to be “severely deficient” and among the state’s most dangerous, touching off further studies and meetings with Marpe and CDOT engineers throughout the summer.

In his recently disclosed discussions with the state, Marpe said he has remained firm that the bridge’s rehabilitation be made in concert with his historic character and that it not be replaced by a modern span.

“You might be surprised, but I fully support the HDC’s request to become the study committee to pursue historic designation of the bridge,” said Marpe. “The bridge protects the character of the community.

“A new bridge could take on qualities that we may not want,” he added. “We should build a case for rehabilitation.”

Matthew Mandell, chairman of the P&Z Committee, said that in addition to preserving history, a major consideration was the narrow bridge not being accessible to large trucks, keeping truck traffic, looking for a shortcut, off local roads in the Green’s Farms area.

“We don’t want Green’s Farms Road to become a service road for I-95,” said Mandell.