It was a low-key gathering at Hudson Malone restaurant Tuesday, where a small group of local Republicans shared one another’s company and listened to some preliminary election results. 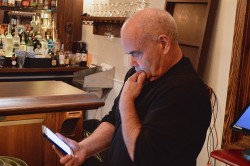 Republican candidate for the 136th state representative seat Chip Stephens looks over the numbers as they come in. (CLICK TO ENLARGE) Jarret Liotta for WestportNow.com

“We put up a good fight,” said Stephens upon learning he had lost the contest by a two-third majority vote.

“I am just so happy that I have great people working with me,” Stephens said, acknowledging the campaign work of co-managers Cathy Walsh and Jack Whittle.

“I met so many nice people at the polls and I’m very happy that we saw this thing through,” he said. “See you in two years.”

“It’s difficult to run as a Republican in a presidential election year in a Democratic town,” Walsh noted.

“Chip was the most qualified person to serve,” she said, “but the national election carried the politics.”