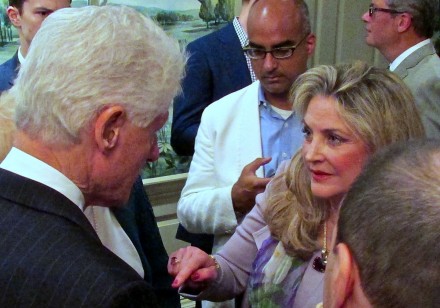 Westporter Kristan Peters-Hamlin, a member of the Representative Town Meeting (RTM), makes a point to former President Bill Clinton tonight at a fundraiser for Hillary Clinton at the Westport home of financier Marc Lasry. Peters-Hamlin hosted Hillary Clinton on her last visit to Westport on March 25, 2008. Hillary Clinton will appear at a Stamford fundraiser on Sunday in advance of Tuesday’s presidential primaries. (CLICK TO ENLARGE) Contributed photo

One thought on “Getting the President’s Ear”