Tonight’s Board of Education and Board of Finance candidates debates sponsored by the Westport’s League of Women Voters (LWV) had a recurring, haunting refrain — the high cost of building renovations and resulting higher taxes. 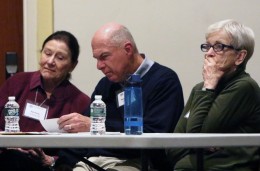 League of Women Voters of Westport officials tonight ponder questions for the candidates. (CLICK TO ENLARGE) Dave Matlow for WestportNow.com

Front and center at the Town Hall event that drew about 200 were the $32 million price tag for a Coleytown Middle School (CMS) renovation underway and a report showing that $96 million will be needed for facilities upgrades over the next 10 years.

While candidates for both boards fielded myriad audience questions presented by moderator Sheila Ward, LWV past president, many of them stemmed from the CMS mold crisis that shuttered the school a year ago resulting in a whopping estimated $32 million renovated cost.

Candidates vying for the school board were Republicans Vik Muktavaram, an incumbent, and Liz Heyer and Democrats Youn Su Chao and Lee Goldstein, known for their PTA work

Both debates, as they had been touted, were actually candidates’ forums, where each one would state his or her position. That did not preclude jabs, such as when Goldstein said the current school board’s failure had caused the Coleytown crisis.

The finance board forum seemed more amenable since all of the candidates are assured seats because the third Republican candidate Michael Guadarrama withdrew from the race on Oct. 10.

“How can we assure the future health of our school buildings?” Ward asked.

“We need to know what went wrong,” Goldstein said.

Chao said that a further review of the critique was needed. Muktavaram said there has to be greater collaboration on school maintenance between the school board and the town, and that infrastructure maintenance has to be delegated, so the Board of Education can focus on education.

Heyer agreed, saying the responsibility should “be delegated to the town or a third party to free up the Board of Education.”

“Should the Board of Education work to make the schools more green?” Ward asked.

All agreed, saying that environmental stewardship should be taught and reinforced at the schools. Chao pointed to the composting program underway at the Greens Farms School as way schools can encourage students “to be global citizens.”

A yes or no question posed by Ward about whether they would support the idea of armed security guards at each of the town’s eight schools received a unanimous showing of signs stating, “No.”

Other questions included what each would look for in hiring a new schools superintendent, ways to encourage more girls to take part in STEM (science, technology, engineering and math) programs and how schools can tackle drug abuse and vaping. All were in agreement but with slightly tweaked approaches.

All school board candidates agreed it is healthier and more productive for students to start school a half-hour later. Muktavaram said he was instrumental on a school start committee, proposing that school days begin 30 minutes later.

Finance board candidates faced questions about keeping taxes down in the face of upcoming capital expenses, paying down OPEB (other post-employment benefits) liabilities and Westport’s fiscal ability to weather another recession.

“I think we’re in a better position than before,” DesMarteau said, noting how the finance board held the reins during the 2007 recession.

Regarding OPEB liabilities, Gordon echoed, “We’re in a much better position.”

Foster said that while keeping the mill rate flat with no tax increases over the past four years has been a laudable, it will be “an overvalued goal” if it is done at the expense maintenance to the detriment of school and town buildings.

“We have to have a mindset of how do we create more efficiencies, and what do we have to do two or three years down the road,” Foster said.

According to Ward, the LWV has another candidates’ event for the Planning and Zoning Commission, the Zoning Board of Appeals, and the Board of Assessment Appeals scheduled for Monday, Oct. 28, at 7 p.m. at Town Hall.