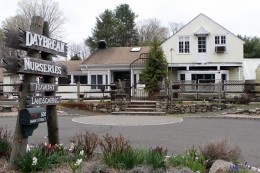 Others, including commission members, however, said the text amendment needed to be better defined. They said that the 3,200-square foot homes allowed were too big, and that the permitted density made the proposal “fatally flawed.”

The commission continued its consideration of the proposal to its March 17 meeting.

Melvin Barr of Barr Associates LLC, who proposed the amendment, said it would allow four dwellings on 1.5 acres in a Residential A zone, each dwelling not to exceed 3,200-square feet.

He said the only property currently meeting the specific criteria outlined in the amendment, though other sites could eventually qualify, was the former Daybreak Nursery property at 500 Main St.

Barr had been before the commission in June 2014 to float ideas about the site. (See WestportNow June 13, 2014)

Peter Greenberg, owner of Norwalk-based Able Construction, purchased the 2.2-acre property for $1,350,000 as the highest bidder in a foreclosure settlement in February 2014. Daybreak Nurseries had been on the site for nearly 73 years. (See WestportNow April 30, 2014)

Barr acknowledged that instead of calling it a cluster housing amendment perhaps a better name would be an amendment allowing clustered single-family homes.

He said the concept, involving homes at least 15 feet from one another, met the need of empty nesters, seniors seeking to downsize, and young families starting out.

Commission member Alan Hodge noted that since only the Daybreak Nursery site currently qualified under the proposed amendment, this might be considered spot zoning. He said he wanted to consult with the town attorney.

Member David Lessing said the goals were laudable but many questions remained.

Chair Chip Stephens said the location at the intersection of Weston Road and Route 136 and not far from Merritt Parkway’s Exit 42 northbound, was already traffic congested. “It’s a nightmare intersection,” he said.

He questioned the 3,200-square foot house size, saying that did not seem to be targeting seniors and first-time homebuyers.

Real estate agent Mary Palmeri Gai, who said she grew up in the Daybreak neighborhood, said such a project was badly needed. And it would be a relief from the heavy truck and car traffic that marked Daybreak Nursery’s time there.

“Younger seniors don’t want to go into shared walls,” she said. “But they do want smaller houses. The town doesn’t have this kind of housing.”

“We don’t have in our regulations a definition of cluster housing,” he said. He said the definition of a bedroom also “needs work.”

“I think it is a good concept because there are very few similar developments around this area,” Calise said.

He said the houses should be smaller, there should be some affordable component, and perhaps a deed restriction on age.

“It’s an interesting concept, but I think it’s a little too loose and you need to tighten it up,” Mandell said.

Eric Troelstra told the P&Z “it’s a slippery slope you are going down.” He said there was a similar property behind his Long Lots Road home that might be suitable for such a development.

He said if the commission wants smaller houses, there should be a stop to knocking down the 2,500-square foot homes and replacing them with 6,000-square foot ones.

Former P&Z Commissioner Eleanor Lowenstein said besides the proposal being spot zoning, she was concerned about the allowable size of homes.

She noted that Post Road condominiums such as Lansdowne, Harvest Commons, and Regents Park have much smaller units. “The size of the maximum unit is out of line to accommodate seniors or smaller families,” Lowenstein said.

Peter Swann, speaking for himself and the Save Westport Now group, said the proposal was “fatally flawed.”

“It should be denied entirely because it is incompatible with and contradictory to the 2007 Plan of Conservation and Development (POCD),” he said.

He said the POCD said neighborhoods should be protected and maintained according to the scale and proportion of lot size.

It will increase density and adversely impact the surrounding neighborhood, Swann said, adding that the amendment would create a “row of looming houses separated by dark alleys.”

Barr, who said his client would be willing to consider three homes of 3,000-square feet on the site, thanked the commission members for their input.