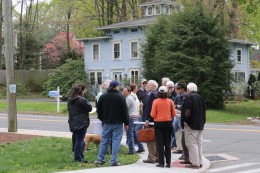 “It’s primarily honorary, and it connotes relatively little in terms of constraints on residents or property owners in the district,” he told the Board of Selectmen Wednesday in explaining the significance of the designation.

Henkles gained the board’s approval to apply for a $10,000 Certified Local Government Grant to prepare a study for the nomination.

He explained that an official from the State Historic Preservation Office, Jenny Scofield, surveyed the area in April .

She suggested that the proposed designation boundary be expanded from the primarily residential east side of the William F. Cribari Memorial Bridge to include some of the commercial district on the west side, he said.

But at a HDC meeting this week, Henkles said there was a mixed reaction from those attending who, he said, were “not 100 percent supportive.”

So, Henkles said, the HDC is reconsidering the application boundaries and may remove some of the structures on the west side of the river.

The application for the designation was seen as an effort by proponents who want the state to preserve the Cribari Bridge rather than replace it.