Following a detailed review process by the Scenic Roads Advisory Committee, the Connecticut Department of Transportation (CDOT) announced today that a nearly two-mile portion of Route 136 in Westport has been officially designated as a Scenic Roadway. 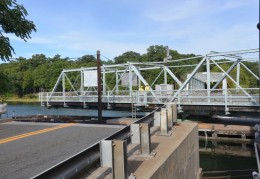 The designation was sought by preservationists who want to see the William F. Cribari Memorial Bridge preserved rather than replaced.

The approved section begins at the intersection with Route 1 and Compo Road South and proceeds southerly to the intersection at Bridge Street, where it turns westerly, terminating at the west abutment of the Saugatuck River Bridge, for a distance of 1.82 miles, CDOT said.

It said the designation was made by Transportation Commissioner James Redesker in consultation with the commissioners of Environmental Protection and Department of Economic and Community Development. The Scenic Road Advisory Committee, which includes representation from each of the three agencies, recommended that this section be designated as a scenic road, CDOT said.

Their move was designed to safeguard the the William F. Cribari Memorial Bridge, which the CDOT plans to renovate.

The 1884-built structure is Connecticut’s oldest, surviving, moveable, hand-cranked swing bridge that is on the National Register of Historic Places.

“This is a great honor for Westport,” said Garten. “It’s gratifying that the state has officially recognized that this route, which contains notable landmark properties and includes the iconic Saugatuck Swing Bridge, has special historic significance and character.”

“The designation adds an additional level of protection for this important area of our town.  Any proposed changes to the bridge must be reviewed by the State Scenic Highway Advisory Committee.

“Effectively, this allows a different set of state officials, who may be more sympathetic to scenic beauty and preservation, to weigh in on the DOT’s plans. We are very excited about having helped garner this honor for Westport.”