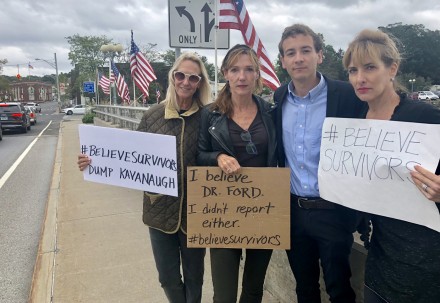 Will Haskell, Democratic candidate for the 26th state Senate District, joined women today in a demonstration on the Ruth Steinkraus Cohen Bridge in Westport’s center as part of a national #BelieveSurvivors walkout in solidarity with Christine Blasey Ford and in protest of Supreme Court Justice Nominee Brett Kavanaugh.  (CLICK TO ENLARGE) Helen Klisser During for WestportNow.com

There will be a public information session on a “Main to Train Study” for Monday, Oct 1, to identify improvements to motor vehicle, bicycle and pedestrian safety on Post Road East and Riverside Avenue, officials announced.

The session will be held in the Town Hall auditorium at 7 p.m.

“This will create better connections between the commercial center of town and the Saugatuck train station and promote non-motorized transportation choices,” the announcement from the Western Connecticut Council of Governments (WestCOG) said. WestCOG is the successor to the South Western Regional Planning Agency, then better known as SWRPA.

WestCOG described the session as an outreach to residents, businesses, commuters and local stakeholders.

The Connecticut Conference of Municipalities today challenged candidates for state office to address more than 1,300 mandates placed on city and town budgets.

The costs associated with these mandates — most of which are supported only partially with state dollars or unfunded entirely — are driving up property tax rates and leeching resources from local services, according to a new CCM candidate bulletin.

CCM also took a proactive strike in its new candidate bulletin, urging those running for office to oppose two controversial proposals that have surfaced at the Capitol in recent years: shifting a portion of teacher pension costs onto communities and expanding workers’ compensation benefits to cover mental stress suffered by police and firefighters.

In a campaign season dominated by one pledge to eliminate the state income tax and a countercharge that this would devastate Connecticut’s quality of life, CCM tried today to focus candidates on achievable goals. 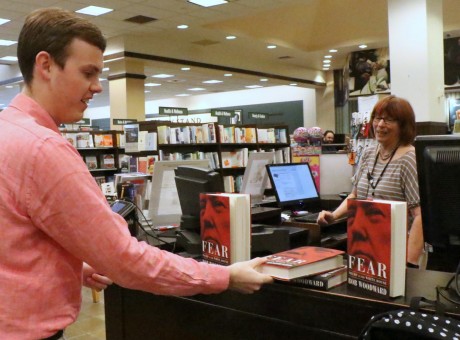 A customer who only gave his first name as Neil purchases two of four remaining copies of Bob Woodward’s “Fear” today at Barnes & Noble, Post Road East. He said he was buying a copy for himself and for a friend. “I want to read it now because Woodward is the most respected author to cover this subject,” he said, B&N received delivery of about 200 copies on Tuesday and the four copies (in picture) were what remained when the store opened today. It is not known to B&N staff when the next shipment will arrive. Meanwhile,  Jennifer Keller, program and event manager at the Westport Library, said there are over 100 names on the wait list. The library purchased 10 more copies Wednesday to add to the several dozen the library has loaned out so far. (CLICK TO ENLARGE) Dave Matlow for WestportNow.com

New London — The first head-to-head debate by Democrat Ned Lamont and Republican Bob Stefanowski ended tonight without Connecticut voters learning how either man would close a $2.1 billion deficit or how Stefanowski would begin to deliver on his audacious promise to eliminate the state income tax. 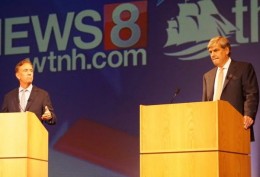 Over the course of a contentious hour, Stefanowski repeatedly tried to convince viewers that Lamont was a new and unimproved version of the state’s unpopular Democratic governor, Dannel P. Malloy. Lamont was willing to concede Stefanowski was his own man, albeit delusional, in insisting Connecticut can live without its single largest revenue source.

Lamont, 64, who briefly became a national political figure by challenging Sen. Joseph I. Lieberman over the war in Iraq, opened and closed by noting he competed with Malloy in 2010 for the gubernatorial nomination, then saying the state is in desperate need of structural changes yet to be accomplished by Malloy or outlined by Stefanowski.

“Bob wasn’t even there to vote against him,” Lamont said, the first of his jabs at Stefanowski’s failure to vote for 16 years. 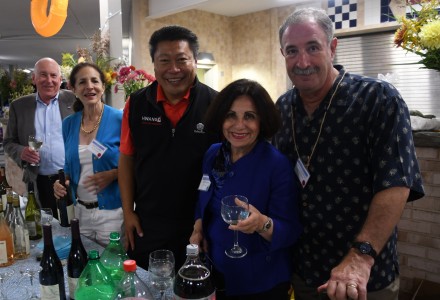 Former Westport First Selectman Bill Seiden, who died at 91 Aug. 8, in Bend, Oregon, seemed a lot like the town he headed from 1981 to 1985 — passionate, showbiz, a little zany and always with a flair for the dramatic.

He even went out that way, announcing and inviting friends to a “Death with Dignity” party after two years of hospice care.

A nephew by marriage to Moe Howard of the Three Stooges, he was a child actor, not only in Stooges episodes, but in films with the legendary Charles Laughton, he told me back in 1984.

Arizona Sen. John McCain, who died tonight at age 81, was no stranger to Westport. In 2004, he made two trips to Westport to support the re-election of U.S. Rep. Chris Shays. He held a town meeting at Saugatuck Elementary School and returned 19 days later when he toured Westport’s Sherwood Diner with Shays. In 2008 prior to becoming the GOP presidential nominee, he visited Westport’s Bridgewater Associates hedge-fund at the invitation of his good friend Ray Dalio, Bridgewater’s founder. Dave Matlow for WestportNow.com and WestportNow.com photos.

Washington — The U.S. Treasury Department today issued new rules aimed at preventing taxpayers in Connecticut and other high-income and high-cost states from avoiding a new cap on the deductibility of their state and local taxes.

The Internal Revenue Service said in May it would move to thwart the workaround Connecticut, New York, New Jersey, California and a number of other states have taken to avoid the new cap on these popular deductions.

The federal tax overhaul, called the Tax Cuts and Jobs Act, limits to $10,000 the amount of SALT taxes an individual can deduct in a calendar year.

The cap is widely seen as punishing so-called “blue states” controlled by Democrats where taxes are often higher than in GOP-dominated “red states.” 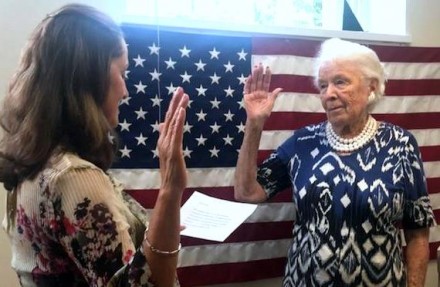 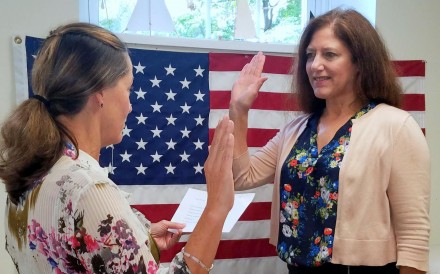 Town Clerk Patty Strauss today swore in two new members of the Representative Town Meeting (RTM) to fill vacancies created by resignations. As it turns out, both are former members of the 36-member nonpartisan legislative body. Lois Schine (top), who served 18 years on the RTM before losing her seat in the November 2015 election, fills a vacancy in District 8 created by the resignation of Elizabeth Moriarity, a freshman member who moved from Westport. Catherine Calise, defeated in November 2017 after serving six years, fills the District 2 vacancy created by Neil Phillips being appointed to the Board of Education. Both will serve the unexpired terms ending in November 2019. (CLICK TO ENLARGE) Contributed photos