The setting seemed cinematic, fictitious even—a worldly, wizened 95-year-old keeping two 18-year olds rapt and continually amazed, so much so that they would keep coming back to hear more. 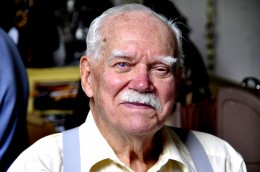 Ed Vebell: at 24, he drew Nazis at Nuremberg while thinking of his Paris girlfriend. (CLICK TO ENLARGE) Phyllis Groner for WestportNow.com

But that was the scene last week at the Compo Beach area home of legendary illustrator-photographer Ed Vebell as he hosted the teens—Wellington Baumann, a 2016 Staples High School graduate, and Aren Heitmann, a recent Fairfield Ludlowe High School graduate.

Baumann and Heitmann, history buffs who will attend Gettysburg College in the fall, are interning with Vebell for the summer in his loft studio. They seemed a good fit.

After all, Vebell, a World War II Army sergeant, was the key artist in Europe and North Africa for Stars & Stripes, the American newspaper reporting on matters affecting the U.S. Armed Forces. He was also the only artist allowed to cover the 1945, post-war Nuremberg, Germany war trials, which prosecuted members of the Nazi leadership.

Vebell also rode with the cavalry in Algiers, was an Olympic fencer, and upon his return statewide, drew for myriad national magazines and newspapers, in the same studio. 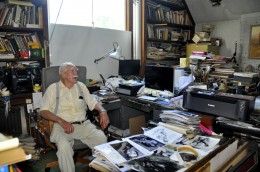 The cluttered studio is jammed with files of illustrations and photos, but one has to look for those. They, like the vase holding artist’s brushes on his desk, are hidden by mounds of artifacts Vebell has used as primary source models.

The latter includes military hats from the French Revolution, the War of 1812, an iron 1650 Jamestown helmet and a World War I German pilot’s leather helmet.

“You get a lot of history here,” said Wellington. “It’s a way to learn. It adds to it. We were digging around and found a 1776 Brown Bess.” 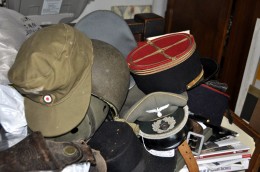 Vebell has military uniforms of all kinds from all wars. (CLICK TO ENLARGE) Phyllis Groner for WestportNow.com

The smooth bore, black powder rifle, like the one held by the Minute Man Statue near Vebell’s home, had been used by the Colonial militia.

Wellington and Aren were also there to sort and file Vebell’s artwork and put them in folders.

“Each one tells a story,” the tall, white-haired and mustachioed Vebell said.

His blue eyes sparkle with mischief as he motions to one file titled “Folies Bergère,” a collection of photos from the famed Paris night club featuring scantily clad and semi-nude women.

“I was there every night for two-and-a-half years,” he says with a wink.

One of the Bergère photos is of his then girlfriend Lysiane.

“When people ask me about Nuremberg, they want to know what I was thinking of when I was drawing all those Nazis,” Vebell said. “I was thinking about my girlfriend back in Paris and who she might be with.” 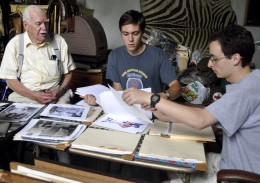 Vebell with interns Wellington Baumann and Aren Heitmann, both 18. (CLICK TO ENLARGE) Phyllis Groner for WestportNow.com

He becomes more serious when he discusses focusing on some faces of history’s Nazi monsters, such as Hermann Goring, “He sat the closest to me,”  Rudolf Hesse and Wilhelm Keitel.

“We had to use a pen, so there would be no changes,” Vebell said. “I pulled it off. People said they were damn good drawings.”

So much so that they are currently in the Holocaust Museum in Washington, D.C. Vebell’s other works devoted to Americana, Native Americans and then popular culture in advertising are in the Norman Rockwell Museum in Stockbridge, Mass. and in Getty Images’ Ed Vebell Gallery.

Vebell’s wartime experiences are also the focus of two books by him being released this summer, “The 40 Bergère” about his bawdy time in Paris and “An Artist at War.” Both are being published by Schiffer Publishing, he said.

Born in 1921 in Chicago, Vebell’s talent for drawing was evident at an early age. Upon graduating from high school, he won scholarships to three different art schools. 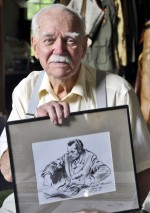 It turned out that each art school ran its summer programs at different times of the day, morning, afternoon and evening. Vebell says he attended all three. Upon finishing, he said, his work was in demand by a number of advertising agencies, as well as the Sears Roebuck catalog.

One of the accidents left him blind in the right eye.

But it did not stop him from drawing and succeeding in his craft, one that he credits for a life he calls lucky.

Vebell said initially he was assigned to be an aircraft gunner, an assignment that had claimed many lives. But when superiors learned he was an artist, he first job was to paint camouflage on planes.

“Later I got sent to Stars & Stripes,” he said. “Being an artist saved my life.” 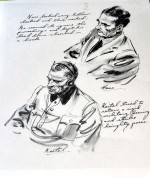 “I spent a whole year in Algeria,” he said. “For three months I rode with the French cavalry. I felt like Lawrence of Arabia.”

There, he also resumed another one of his passions forged in a Chicago club, fencing. It was a hobby that after the war would cost him wounds to his chest, neck and groin, but rewarded him with gold and bronze medals, as well as being a finalist at the 1952 Helsinki Olympics.

In 1953, he and his late wife, Elsa, settled into the Quentin Road home he has lived in ever since. Elsa, who he says was a descendant of Spanish royalty, died 12 years ago.

One of his three daughters, Andra Vebell, who serves on Westport’s Planning and Zoning Commission, lives next door with he husband Larry Hoy, an artist who designs churches, and their two boys Dylan and Colin.

Another daughter Victoria, who teaches art at the Pratt Institute, lives in New Haven, and daughter Renee lives in Hanover, N.H. and has one boy.

Looking around his lair, he says that hidden among the boxes are pieces of Hitler’s toilet retrieved from his bunker. Boxed in a studio shower that hasn’t been used for years is Buffalo Bill Cody’s hat. 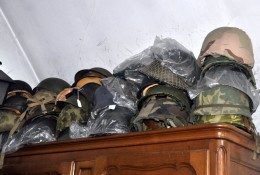 Some of Vebell’s military collection will soon go up for auction. (CLICK TO ENLARGE) Phyllis Groner for WestportNow.com

Hidden somehwere else, he can’t remember, is the original plaster model of the American Indian head used on the Buffalo Nickel.

Vebell said that after the Westport coin artist James Earl Fraser had died, his landlord emptied out Fraser’s studio “and just tossed everything out on the lawn.”

He said that he and his friend, the late Stevan Dohanos, another legendary artist known for his Saturday Evening Post covers, retrieved what they could of Fraser’s work.

All of Vebell’s collections, especially military artifacts, were accumulated, so he could have precise representations in his drawings and photographs. It all began when World Book Encyclopedia commissioned him to illustrate a military history volume.

He said that in the next few days an auctioneer will be arriving to put parts of his collection on the block, and the rest will be part of his heirs’, as popular culture would say, strange inheritance.

Vebell’s collections grew in other directions over the years as he became “booked solid” drawing for Life, Time, Sports Illustrated and Reader’s Digest.

“The town was unbelievable,” Vebell added. “You had the best talent in the United States, and they were all at one time in my studio.”

One thought on “At 95, Ed Vebell Still Drawing on History”